Controlling an Invasive Fly, with Help from IGTOA 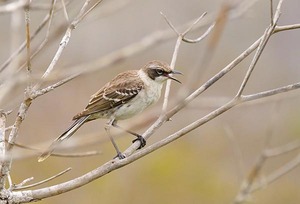 As anyone traveling to the Galapagos soon learns, Ecuador takes the protection of its famed islands very seriously. In fact, in the 1990s, the Quarantine and Inspection System of Galapagos (SICGAL) was established to inspect the luggage of newly arrived tourists—and goods arriving on cargo ships—with the goal of catching any “stowaway” non-native, invasive insects or seeds that could arrive and prove harmful. Many other actions and programs have also been undertaken, such as capturing and removing all invasive mammals and plants from several of the islands.

However, there’s at least one new alien that just might soon be welcomed: a parasitic wasp.

For more than 10 years, terrestrial bird species have been declining rapidly on the inhabited islands of the Galapagos, with populations or subspecies of some endemic, passerine birds disappearing altogether. Among a variety of threats—including diseases, habitat loss, introduced cats and rats, and pesticides—the biggest threat is the parasitic, invasive fly, Philornis downsi.

Should tests show that a particular wasp is the true, natural enemy of Philornis downsi, it could soon be introduced to its new home in the Galapagos. And the International Galapagos Tour Operators Association (IGTOA) has just voted to award the Charles Darwin Foundation (CDF) a grant in the amount of $25,000 to help find out if it’s so. 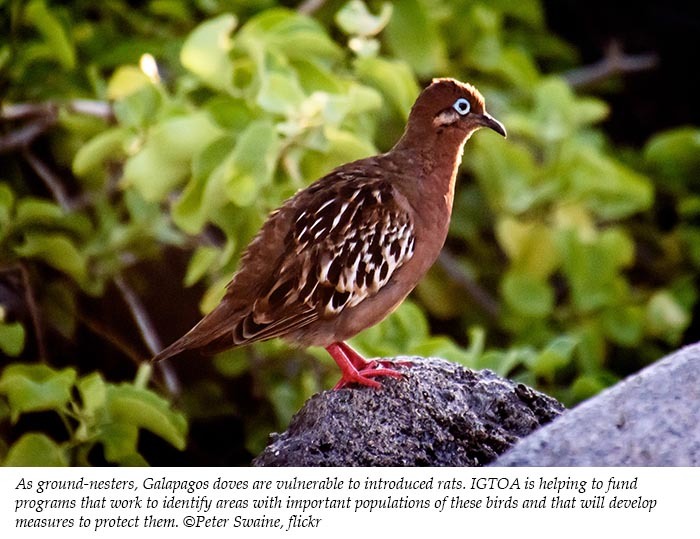 Born in the lab

Some threatened bird species are especially vulnerable to the damage caused by Philornis downsi, including the Galapagos dove, the Galapagos vermilion flycatcher, the large tree finch, the medium tree finch, the woodpecker finch and the critically endangered mangrove finch. CDF is currently working with the Galapagos National Park to investigate methods to protect these iconic birds.

One plan involves breeding the fly in large numbers in the lab for two reasons: 1) in order to provide a continuous supply of the insects for all research needs and 2) to evaluate the potential for using an eradication strategy called the “sterile insect technique,” a process where large numbers of laboratory-raised, sterile males are released into the field to mate with wild females, resulting in the production of infertile eggs. This approach has previously succeeded in North America, when the screwworm fly was totally wiped out.

CDF has recently developed a basic method to rear Philornis downsi in the laboratory without the presence of its living host, marking the first time in history that ectoparasitic flies have been reared in captivity. However, much more needs to be learned about the behavior, diet, genetics and microbiology of the fly in order to breed them in large numbers. 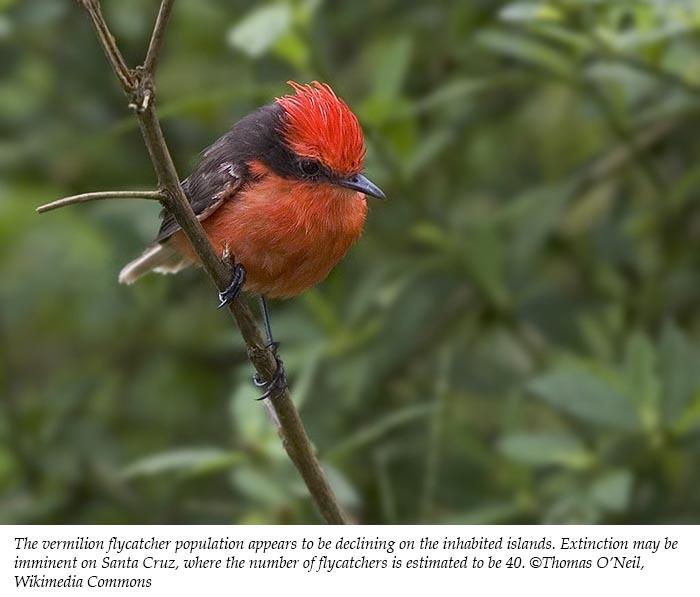 Biology in the field

To glean that kind of knowledge, CDF is at the same time studying the biology and ecology of the fly in the field. Scientists at the Hebrew University of Jerusalem are working on describing the bacterial community in the gut of the flies to determine whether larvae raised in the laboratory are missing crucial bacteria for development. And, scientists from State University of New York, College of Environmental Science and Forestry, are looking into olfactory cues used by the flies as they search for food, mates and nestlings. So far, studies have identified attractant odors from adult birds, bird eggs and fermenting fruit.

Such attractants can potentially be used as lures to trap the flies and complement measures that are already proving successful in protecting threatened birds, such as the one employed by the Mangrove Finch Project’s Head Start Program, which has successfully saved chicks from parasitism and increased population numbers by about 40 percent. Another method that is proving successful is the injection of environmentally-friendly insecticides into the bases of bird nests where the blood-feeding fly larvae reside. This technique has increased fledgling survival in nests of four threatened bird species, including the mangrove finch.

But the development of larger scale, sustainable solutions that can significantly and permanently reduce or eliminate populations of Philornis downsi are needed. A biological control appears to be the most promising, long-term answer.

To date, at least two wasp species have been found that seem to be specialist, natural enemies of Philornis downsi. If further testing confirms this, the next step will be to request approval to bring them to the quarantine facility at the Charles Darwin Research Station to conduct tests to ensure they won’t negatively affect existing, native Galapagos insects and wildlife. 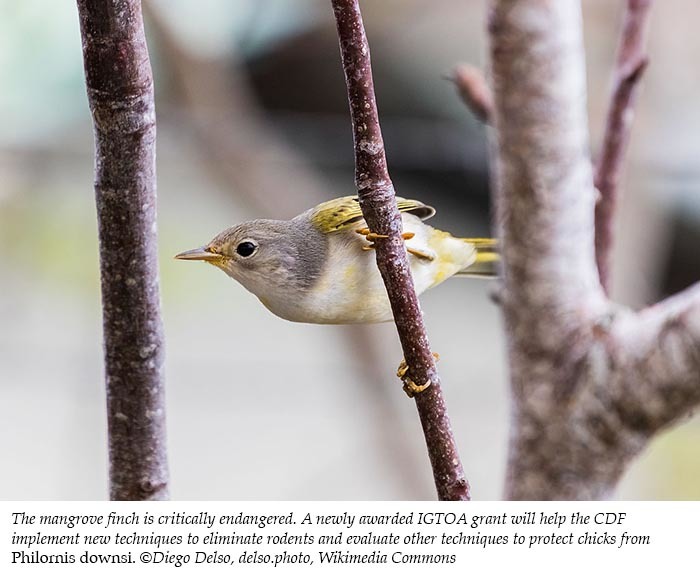 Big gains in the islands

Biological control is considered a safe and effective option for managing environmental pests in hard-to-reach locations. It has been used successfully in the Galapagos Islands before. After years of extensive research, the Australian ladybug was introduced to combat the invasive cottony cushion scale, an insect that threatened more than 60 native plants. Thus far, the ladybugs have managed to control cottony cushion scale numbers with no apparent negative impact on other species.

Perhaps, soon welcoming in some small aliens will result in some big rewards for the Galapagos Islands’ feathered and winged natives.

Feature image: The diverse and friendly birdlife of the Galapagos often enraptures even those who don’t consider themselves birders. Mockingbirds are often the first animals to greet visitors when they land on an island. ©Pedro Szekely, flickr