Galapagos: Will Alien Invaders Take Down Its Avian World? 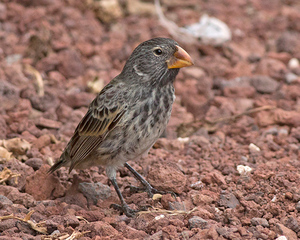 The Galapagos have always been full of contrasts. Here, you can hike through an arid, cactus-covered landscape; and one island later, find yourself surrounded by fern- and moss-covered forests. There are red sands that butt up against clear-blue waters, birds that cannot fly and penguins that share beaches with flamingos. But, now, unfortunately, the Galapagos Islands could also become known as the place where flies finished off finches.

In the 1960s, a parasitic fly species, Philornis downsi, was accidentally introduced into the archipelago. Research reported in the journal Annals of the Entomological Society of America in 2015 showed that the insect came from mainland Ecuador, where it is a native. Because adults of the species feed on fruits, it may have stowed away on a boatload of bananas.

This innocent-looking fly (appearing similar to a common housefly) has a dark side: its larvae suck the blood out of its hosts—in the Galapagos’s case, the fledglings of Darwin’s finches, named for scientist Charles Darwin, who first identified them in 1835.

The fly is now present on 15 of the 17 largest Galapagos Islands, and 11 of the 15 finch species have been confirmed as prey.

This fly is capable of changing the Galapagos forever. 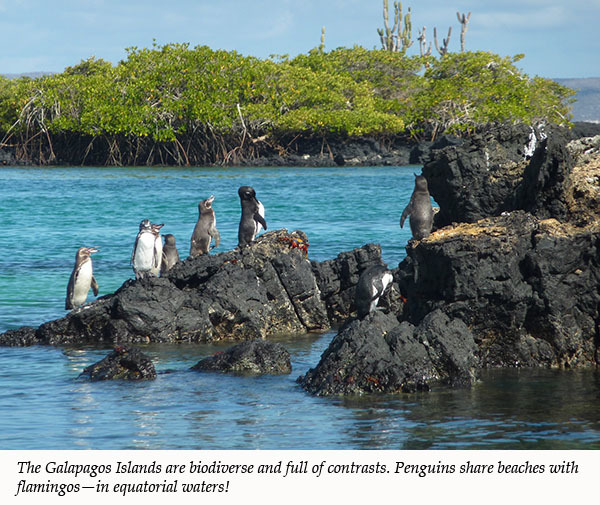 The downside of Philornis downsi

It wasn’t until 1997 that researchers first discovered Philornis downsi in woodpecker finch nests in the Galapagos. They soon found it in every other bird species they examined.

Philornis downsi females lay their eggs inside active bird nests. The resulting larvae then crawl out at night and feed on the nestlings. The first-instar larvae feed inside the nostrils (or nares) of the baby birds, sucking up their blood; while the second and third instars feed by scratching the birds’ skin and ingesting the blood and other bodily fluids.

Not only are the world-famous Darwin’s finches being devastated by this menace—especially the mangrove finch and medium tree finch—but the very rare Floreana mockingbird is also in peril. In addition to direct nestling mortality (sometimes up to 100 percent of fledglings in a nest die from parasitism), those nestlings that do manage to survive often have anemia, deformed beaks and reduced growth rates—malformations that may be fatal or leave them too weak to fledge. 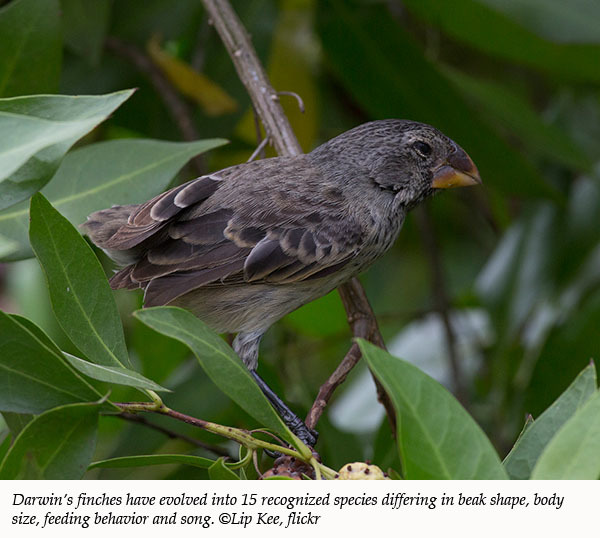 Alongside other risk factors that the islands’ birds are facing—such as habitat destruction and predation by other invasive species, such as rats—Philornis downsi could be the final blow that causes some bird species to completely disappear from certain islands.

Cotton, captive breeding and other controls

Coming up with ways to deal with the alien fly are underway. The challenge is to make sure that those methods are ecologically sound and won’t harm the unique ecosystems found in the Galapagos.

In 2014, Sarah Knutie from the University of Utah and her team tested an ingenious idea for getting finches to fumigate their own nests. They set up dispensers filled with cotton that was laced with insecticide. The birds were naturally attracted to the cotton, which they like to use as a soft lining for their nests. The results from the experiment showed that when the birds incorporated permethrin-treated cotton into their nests, they had significantly fewer Philornis downsi than control nests (nests lacking the insecticide-laced cotton). What’s more, nests containing at least one gram of the cotton were virtually parasite-free. 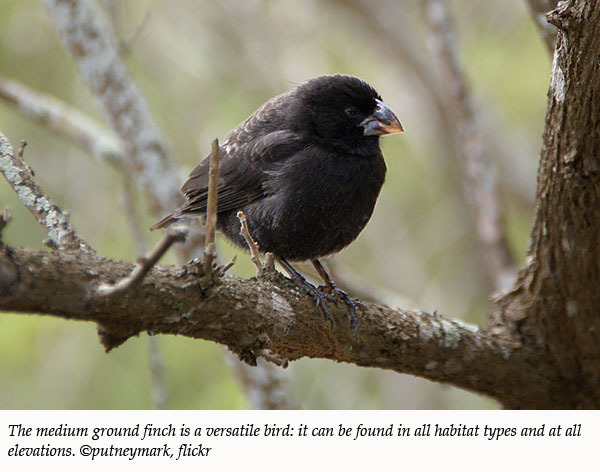 While that approach is promising, the Galapagos National Park is an area in which the application of pesticides is prohibited, so other methods must be found to kill the flies. One of those tactics includes enlisting the aid of a wasp as a biological control.

Wasps that are called parasitoids lay their eggs inside other parasites and destroy them. Such parasitoids tend to be very specialized, and researcher George Heimpel, an entomologist at the University of Minnesota, thinks a wasp he collected from Trinidad may just be the one needed to eradicate Philornis downsi from the Galapagos Islands. However, further research is needed before releasing a “natural” enemy into the archipelago’s fragile ecosystems.

Another encouraging strategy involves the “sterile insect technique,” which means breeding infertile, male Philornis downsi flies in a lab that can subsequently be released into the Galapagos to disrupt the reproduction cycle. The more female flies in the wild that mate with the dummy males, the fewer larvae the birds will have to deal with in the next generation. 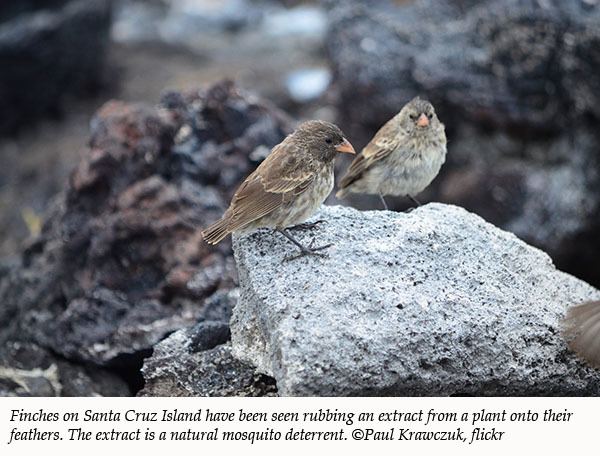 Captive bird breeding programs, such as the one conducted by the Mangrove Finch Project, a joint effort of the Charles Darwin Foundation, the Durrell Wildlife Conservation Trust, the Galapagos National Park Directorate and San Diego Zoo Global, are also offering hope that the precipice will be avoided.

In the end, the birds, themselves, may come up with an answer. In an article published in the journal Nature in late 2016, it was revealed that researchers studying finches on Santa Cruz Island recorded a behavioral innovation that had never been seen before: they saw individuals from four different bird species rub the leaves of the endemic tree Psidium galapageium (Galapagos guava) on their feathers, either by threading a piece of leaf through them or by chewing up a leaf and then applying the mash. While it’s not uncommon, say the scientists, for birds to rub arthropods (often ants) on themselves, using plants in this way is rarely witnessed.

Laboratory experiments later revealed that while the guava extract did not kill Philornis downsi mosquitoes, it did inhibit the growth of their larvae, suggesting that the birds are using the plant as a preventive measure to protect themselves from the insects.

Being the only spot in the world to have 15 species of birds recognized as Darwin’s finches is one facet of the singular, incongruous Galapagos Islands that it would be heartbreaking—and best not—to contradict.

Mattie
about 1 year ago

It's very sumple to find out any matter on net as compared to textbooks, as I found this post at this web page. автополив хантер web site автоматический полив хантер

Princess
about 1 year ago

Heath
about 1 year ago

Kieran
about 1 year ago

First of all I want to say great blog! I had a quick questiokn in which I'd like to askk if yoou doo not mind. I was interested to find out how you center yourself and clear your thoughts before writing. I've had difficulty clearing my thoughts in getting my ideas out. I truly do enjoy writing but it just seems like the first 10 to 15 minutes tend to bee wasted simply just trying to figure out how tto begin. Any suggestions orr tips? Cheers! автоматический полив газонов webpage системы туманообразования цены

It's very trouble-free to find out any matter on web as compared to textbooks, as I found this article at this web page. 1xbet мобильная версия промокод как активировать

It is really a great and helpful piece of info. I'm satisfied that you shared this helpful info with us. Please stay us informed like this. Thank you for sharing. créer un code promo 1xbet

If some one wants to be updated with most recent technologies afterward he must be go to see this website and be up to date everyday. comment utiliser le code promo 1xbet

We will help you promote your site, backlinks for the site are here inexpensive www.links-for.site

Don’t judge a book by its cover. https://strekatilo294.com Take this proverb, for example. Fall seven times, stand up eight. But Yoda isn’t having it. Like George Washington, Sandys believed that telling the truth is always the way to go. The complete quote was, A Jack of all trades and master of none, but oftentimes better than a master of one. Skilled writers use aphorisms to evoke big ideas in a relatable way. For example. But not today. The early bird gets the worm. So what do you do. The part in Star Wars where Yoda says, There is do, or do not. We’ve all probably had to learn that the hard way. He once stated, If you want a thing done well, do it yourself. The Purpose & Function of Aphorism Give it a try!