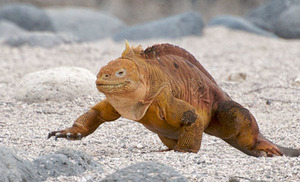 Rewilding, which is defined as the planned reintroduction of a plant or animal species into a habitat from which it has disappeared in an effort to increase biodiversity and restore the health of an ecosystem, can be a powerful conservation tool. Recently, the strategy was used in the Galapagos to return the Galapagos land iguana (Conolophus subcristatus) to Santiago Island in one of the largest iguana translocations ever attempted.

In 1835, Charles Darwin visited Santiago and described a scene where iguanas were so abundant that he had trouble finding a place to pitch his tent. By 1901, however, when researchers from the California Academy of Sciences visited Santiago, they found only skeletal remains of the reptiles. Introduced animals, such as cats, dogs, feral pigs and rats, had wiped out the Galapagos land iguana population on the island by destroying the native landscape, outcompeting iguanas for food, and preying on their eggs and young.

The deadliest foe for the land iguanas may have been the pigs, which were brought to the island in the 1800s. The omnivorous and ravenous swine subsequently ran wild and are thought to have played a big role in many of the extinctions and ecosystem degradations not only on Santiago but on many other Galapagos Islands, as well.

Fortunately, in 2004 Santiago Island became the largest island in the world to be freed of invasive feral pigs as part of the Galapagos Conservancy’s Project Isabela. Bringing the land iguanas back home, then, seemed like the next, natural step. 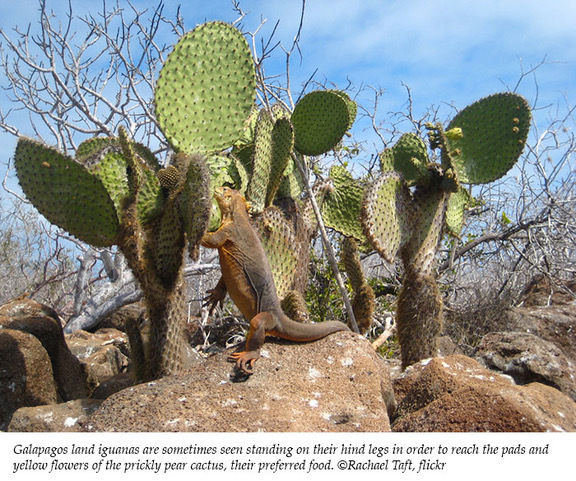 The Galapagos land iguana is one of three iguana species endemic to the Galapagos Islands (the others are the Santa Fe land iguana and the pink Galapagos land iguana). This large, yellow lizard with powerful hind legs inhabits the arid zone on seven major islands: Baltra, Fernandina, Isabela, Santa Cruz, Santiago, South Plaza and North Seymour. The animal is currently classified by the International Union for Conservation of Nature (IUCN) on its Red List as vulnerable. Nine of 12 populations suffer from feral cat predation. Making their situation even more precarious is the fact that some land iguana populations are skewing on the elderly side, which means that they have declining reproductive rates.

At the beginning of 2016, some astute naturalist guides in the Galapagos began reporting that they noticed an increasing loss of vegetation—particularly cacti—on North Seymour. The island had more than 6,000 land iguanas, far too many for it to support. In order to protect North Seymour’s ecological balance and restore Santiago’s, a four-phase reintroduction program was planned. The first two phases started at the end of 2018 with the capture of land iguanas on North Seymour, followed by their transfer to Santa Cruz Island, where they underwent health checks and a three-to-four-week quarantine to ensure that seeds in their guts were not inadvertently carried between islands.

The third phase took place in early January 2019, when the Galapagos National Park Authority released 1,436 North Seymour land iguanas into the coastal areas of Santiago at Bucanero and Puerto Nuevo, which have ecosystems similar to those of their natural habitat on North Seymour and have abundant vegetation for food. 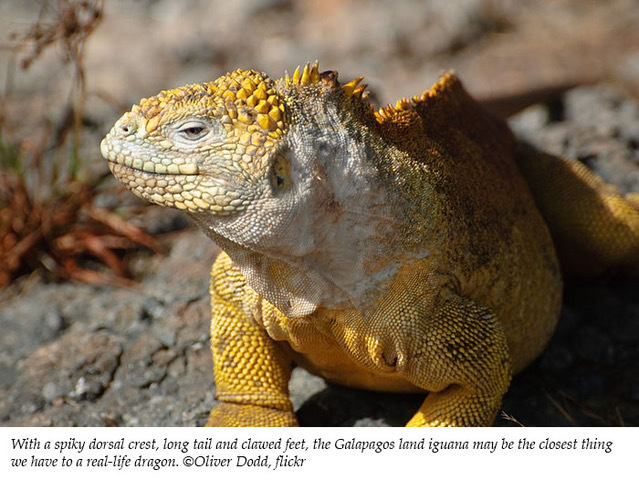 The last stage of the project, which began in February 2019, is monitoring the iguanas to see which plants are their favorites, if the animals are eating well and if they’re building nests. Other goals include preventing rodents and ants from raiding iguana nests; providing an updated estimation of population size and health status of land iguanas on Fernandina, Isabela and Santa Cruz islands; and reviewing the vulnerable status of the species for the first time since 1996.

Funding contingent, other large-scale restoration efforts are being developed for other islands in the Galapagos in 2020, such as the one on Floreana Island, where invasive predators will be eradicated, protecting 55 endangered species and allowing for the reintroduction of 13 locally extinct species, including the endangered Floreana mockingbird and Floreana giant tortoise.

The land iguana’s clawed feet, spiny crest and lengthy tail give the animal a mythical aura; they often remind us of diminutive dragons. Rewilding, too, is sometimes thought of as fanciful, for can we ever really get back to the world as it was before we humans arrived and so drastically influenced it?

My wish is that the land iguanas of Santiago Island will be highly successful, to make us all think so.

Feature image: The Galapagos land iguana is a large, yellow lizard with powerful hind legs. Classified as vulnerable by the IUCN, it lives on seven major islands. ©A. Davey, flickr

Joe Adair
over 2 years ago

"What are the chances of success?" Depends on how threatening processes are managed. Simple answer, hard to do.

Ffio Welford
over 2 years ago

I hope for success as they are truly amazing, fascinating beings.