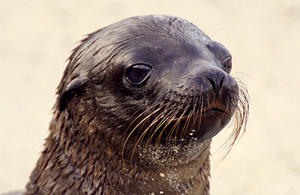 Playful and curious, Galapagos sea lions are the most commonly seen marine mammals in the islands. Most visitors go home with vivid memories of them because they totally accept our human presence on land and so willingly engage with us while we’re in the water. But despite being frequent island “greeters,” they are actually endangered.

The main threat to Galapagos sea lions is El Ninos, which cause extreme weather patterns. In El Nino years, the marine life on which sea lions depend—such as Pacific sardines and small squid—can collapse, in turn affecting the survival and breeding success of the sea lions.

When sea temperatures rise, as they do during El Nino events, the sardine population around the islands drops. In fact, in the aftermath of the 1982 El Nino, sea lion pups began to show signs of starvation. On Santa Fe Island, sea lion pup mortality increased rapidly; only 19 of 140 pups survived their first five months. Most were abandoned by their mothers and starved to death. Yearlings were extremely scarce on all the islands. In any El Nino year, up to 100 percent of the pups, 50 percent of the yearlings and a large number of adults may die.

Research published in 2014 by more than a dozen climate scientists warned that rising ocean temperatures were making El Ninos both more frequent and more intense. UNESCO, the United Nations Educational, Scientific and Cultural Organization, now warns that the Galapagos Islands are one of the places most vulnerable to the impacts of climate change.

Luckily, the smart and resourceful Galapagos sea lions are doing something about it. 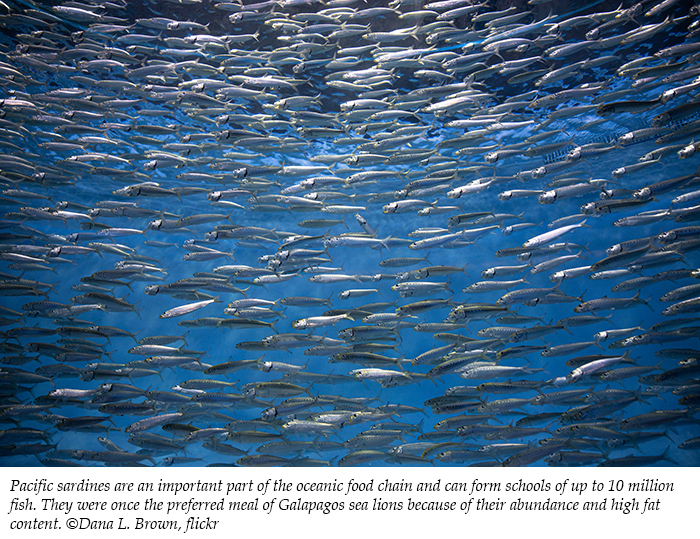 Because of their abundance and high fat content, sardines have typically been Galapagos sea lions’ preferred meals. But climate change has caused these mammals to change their tune: they’re now going after tuna. Because of both their heft and their similarly high-fat flesh, tuna happen to be a much more valuable prize for the sea lions. But tuna are also among the quickest fish in the sea: they easily swim twice as fast as the sea lions, even when the marine mammals are lunging at top speed. They are much harder to catch than sardines.

Recently, researchers working in coves off of Fernandina Island and the north shore of Isabela Island found that shoreline rocks were strewn with the bones of a massive type of fish. The bones were identified as those of yellowfin tuna. When the scientists learned how those tuna remains got there, they were amazed: it was the work of Galapagos sea lions.

Using the small, lava coves as traps, bull sea lions would round up yellowfin tuna, driving them into the shallow nooks of the craggy rocks, where the exhausted fish would often leap ashore in a last-ditch attempt to escape. Typically, the biggest bull sea lions dispatched the prey with bites to the nape and throat. They then would lay claim to the choicest cuts of meat, leaving the heads and tails to be snatched up by younger sea lions. Such behaviors had previously never before been documented.

However, when hunting tuna—that can weigh 50 pounds or more—success for the sea lions is far from guaranteed. Pulling it off requires three things: teamwork, patience and exactly the right volcanic formations. 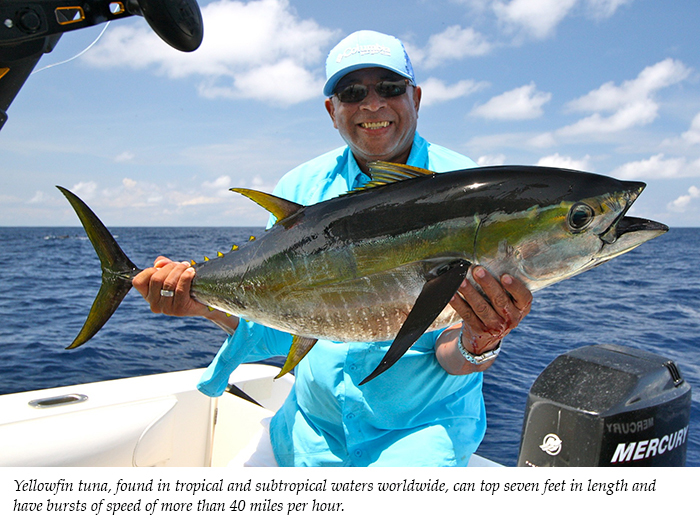 To start a hunt, a group of three to six sea lions gathers outside the entrance of a narrow cove and begins to patrol the water slowly, waiting for a passing school of tuna. At the first sight of the fish, the sea lions porpoise and zigzag on the seaward side of the school, gradually driving the fish toward the other end of the cove.

Since chasing tuna in the open ocean would be futile, the sea lions patiently bide their time, creating just enough commotion so that the nervous tuna will unwittingly swim into the trap. As soon they do, one sea lion will turn back to guard the cove’s outlet, cutting off the exit route for any fish that might try to reverse course and escape. The other sea lions continue pushing the tuna toward the shallows, driving the fish into a frenzy. Desperate to get away, the fish shoot forward and surge straight onto the rocks. Those that do manage to turn back frequently find themselves swimming straight into the jaws of a waiting sea lion. 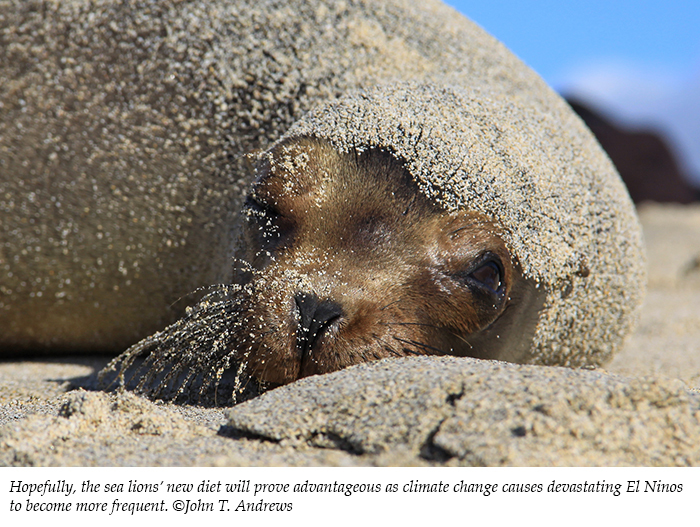 Will the shoreline strategy succeed?

For the sea lions, catching a tuna is just the first half of a very difficult battle. The fever-pitched activity attracts a menagerie of other hungry species, including brown pelicans and blacktip sharks. Following a hunt, it’s not unusual for a big blacktip to steal an entire tuna from a sea lion’s jaws.

If the sea lions prevail, however, there is usually plenty of tuna to go around. After the sea lions finish, there is often enough even for a suite of scavengers that follow them, many of which are also feeling the pressure of climate change.

Researchers say that tuna hunting will probably never be a full replacement for the sea lions’ other declining food sources since it requires such specific shoreline formations, which aren’t in great abundance throughout the islands. But the demonstration of the Galapagos sea lions’ creativity in adapting to changing conditions does offer hope for the future of the species.

Joan
over 1 year ago

This is akin to the group of Hudson's Bay polar bears, recently featured on the BBC TV series "Seven Worlds, One Planet," who have begun hunting beluga whales. Declining ice on the bay has diminished the bears' opportunities for their usual prey, seals. Nature tries to find a way!