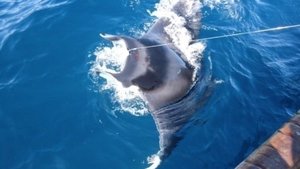 The contentious issue of commercial longline fishing in the Galapagos Islands has once again reared its ugly head. As its name suggests, the practice involves using a long fishing line, sometimes several miles in length, with baited hooks at regular intervals.  Environmentalists decry the practice because of the high number of non-targeted species, known as by-catch, that are often caught alongside the intended catch–large pelagic species, such as albacore and swordfish.

The technique was outlawed in the Galapagos Islands in 2006, but a legal loophole was created in 2008 with the passing of the “Reglamento Especial de Pesquera,” (Special Fisheries Regulation), which permits by-catch fishing under the pretext of scientific research. In August of 2016, a research project to study deep-sea longline fishing in the Darwin and Wolf Islands Marine Sanctuary was approved.

AGIPA, the association of professional Galapagos guides, is ringing alarm bells about the study, which began last year. According to a recent AGIPA press release, the new study will lead to the deaths of many protected species before its completed in 2019 and it may lead to the reinstatement of widespread longline fishing in the islands, because it is systematically underreporting actual by-catch numbers. Preliminary results show that for every three commercially targeted species, seven protected species were caught as by-catch.  While fishermen have surprisingly been reporting 0% by-catch in some trials,  according to AGIPA, 75% of the trials have been done without the presence of fisheries observers from institutions like the Galapagos National Park and the Charles Darwin Foundation, which the research proposal requires.

Unfortunately, animals caught as by-catch often suffer greatly and many die. By-catch species in the Galapagos include a variety of species of sharks, as well as dolphins, sea turtles and seabirds. A technical report issued by the Galapagos National Park estimates that if long line fishing is reinstated in the islands, over 10,000 will sharks will be caught annually and 7% of them will die, according to AGIPA.

IGTOA commends AGIPA and Galapagos guides for taking a stand against the potential reinstatement of longline fishing in the Galapagos Islands. The Galapagos Marine Reserve is one of the world’s last great protected marine areas and it is a relative safe haven for many species that are being decimated elsewhere across the globe. The GMR is already being targeted by massive illegal commercial fishing operations. The last thing it needs is for commercial longline fishing to be made legal there once again.  If you agree, and would like your voice to be heard, please sing AGIPA's petition to stop longline fishing in the Galapagos Islands by clicking here.