Sharks in Galapagos Bagged, Tagged and Monitored to Aid in Future Conservation Efforts 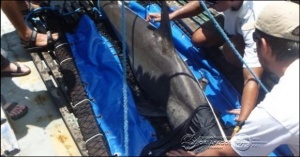 The Galapagos National Park Service, with support from the Charles Darwin Foundation and the University of California at Davis, recently captured and tagged eleven sharks near Darwin and Wolf Islands, in the northern part of the Galapagos archipelago.

Satellite tags were placed on five silky sharks, two hammerhead sharks, two Galapagos sharks, and two black tip sharks. When the sharks come near the surface, the tags will send a satellite signal to the Galapagos National Park Service's monitoring station. The goal of the program is to gain a clearer understanding of the sharks' movements in order to assist with shark conservation efforts in the future. If, for example, researchers discover that sharks regularly migrate beyond the confines of the Galapagos Marine Reserve, it will be a clear indication that future conservation policies will require cooperation with fishery management authorities and other organizations outside of the Galapagos.

Sadly, in recent years,  sharks have been aggressively and illegally fished in the Galapagos and around the world to meet the growing demand for shark fin soup, primarily in China. Now more than ever, forward thinking conservation, public awareness, and research initiatives are required to safeguard the safety of the world's dwindling shark populations.

The International Galapagos Tour Operators Association, and our membership of premiere Galapagos tour companies, are proud to support the Charles Darwin Foundation and other organizations that are working to protect sharks and other species in the Galapagos Islands. You can help support these types of efforts in the future by traveling with an IGTOA member.

A special thanks to IGTOA member CNH Tours for bringing this story to our attention.