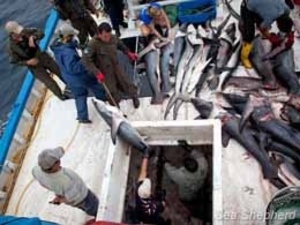 Sea Shepherd Conservation Society (SSCS), a non-profit, marine wildlife conservation organization active in the Galapagos Islands, announced earlier this week that Ecuador's national judicial authority's decision to create a provincial court in the Galapagos may be "the light at the end of tunnel" in the organization's battle to improve environmental justice in the islands. According to Sea Shepherd's blog, the creation of the new provincial court means that environmental prosecutions will no longer have to take place nearly a thousand kilometers away from the Galapagos on the Ecuadorian mainland.

Last year, the Galapagos made international news when authorities captured a fishing vessel containing the remains of at least 357 dead sharks (some sources reported the number as high as 379), making it the worst shark poaching incident in the history of the Galapagos National Park. Soon thereafter, a judge ordered the release of all 19 suspects under the condition that crew members report to a judge every eight days in their hometown of Manta, which is on Ecuador's mainland, almost 600 miles from the Galapagos.

SSCS has argued that the judge's action guaranteed that the suspects will never stand trial for their alleged crimes, since suspects in environmental crime cases have never been successfully returned to the Galapagos for prosecution. The Galapagos is the only province of Ecuador without a provincial court of justice and SSCS has called the case "the very symbol of a failing judicial system in Galapagos."

IGTOA commends SSCS for their tireless efforts to shed light on the problem of illegal fishing and poaching in the Galapagos and for their role in pressuring authorities to at long last create a much-needed provincial court in the islands. Job well done!