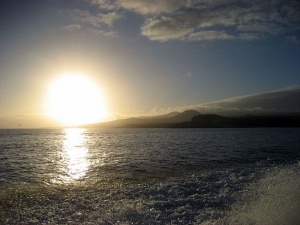 Renowned comedian Sarah Silverman is putting the weight of her considerable name-recognition behind a new campaign on crowd-sourcing site Indiegogo that seeks to raise money for a small solar field in the Galapagos Islands.  Silverman’s brother-in-law, Yosef Abramowitz, is President of the Arava Power Company, Israel's leading solar developer, and President and Co-Founder of Energiya Global, a Jerusalem-based solar firm dedicated to bringing solar power on a commercial basis to developing nations.  The Galapagos is currently fueled almost entirely by diesel power, so the entrepreneur and environmentalist wants to install a 300-kilowatt, 1,200-panel solar field on the site of an old garbage dump on San Cristobal to replace some of that polluting energy production.

Because the project is too small to appeal to banks and traditional investors, Abramowitz decided to turn to the public for donations. In a two-minute video on Indiegogo, Abramowitz makes his appeal in an orange cape and mask, calling himself “Captain Sunshine,” and explaining the importance of utilizing a cleaner source of energy in the delicate island ecosystem. He claims that the new solar field will replace 147,000 liters of oil per year. Prizes for donations range from a high-five from Captain Sunshine to naming rights for the field, and include a signed photo of Sarah Silverman at the $75 donation level, and a Skype conversation with her at the $5,000 level.

The goal of the campaign is to raise $250,000 on Indiegogo, which will go to final pre-development costs and a down payment to the EPC (Engineering, Procurement and Construction) company that will build the project.  Abramowitz plans to raise an additional $1.2 million from various investors.

Click here to read more on the Jerusalem Post, and here to watch the video or make a donation on Indiegogo.  (Photo © Iris Diensthuber)