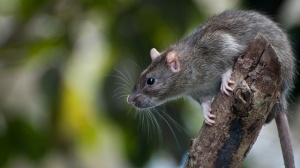 The Galapagos Islands are the setting for an escalating war on rats, and the island of Pinzon is the latest battleground.  Rats were introduced to the islands by humans and have become a scourge in the decades since, posing a significant threat to the survival of several native species.   Black rats have prevented Pinzon Island giant tortoise from successfully reproducing in the wild for the last 150 years, as they prey on eggs and hatchlings.  As a result, all of the new tortoises on Pinzon born in the last 45 years have been hatched and raised in captivity and reintroduced to the island several years later.  The island’s lava lizard, land iguana and cactus finch populations have also struggled in the face of the non-native rats.

But the Galapagos National Park Service (GNPS), along with a number of partner organizations, is fighting back, and they are setting their sights high.  Their stated goal is the eradication of rats from the islands by 2020.  Eliminating rats from islands without destroying native species is a notoriously difficult endeavor, and it is made harder in the Galapagos because of their rugged and inhospitable landscape.

The GNPS can already claim victory on Rabida Island, now officially rat-free after an eradication effort that began in January of 2011. The process there involved helicopters and necessitated the capture of Galapagos hawks, to prevent them from dining on poisoned rats.  Pinzon is three times the size of Rabida, and it remains to be seen if efforts there will be as successful.

The GNPS has announced that the next island in line for the program is Floreana, a much larger island, at 172 square kilometers.  If successful, Floreana will be the largest island in the world to have been freed of invasive rats. (Photo © IO9)