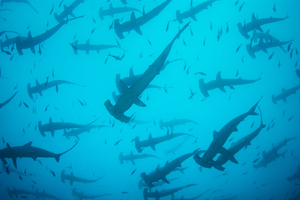 Shark attacks are almost unheard of in the Galapagos Islands, in spite of the fact that the archipelago and surrounding marine sanctuary are one of the world's last great safe havens for these awesome oceanic predators. That's why it came as a huge surprise earlier this week when a 45-year-old British man was bitten by a shark at a visitor site just off the shore of Isla Sant Fe.

According to reports, the man was swimming along the shore when he felt a tug on his foot. He turned to see shark biting his leg. He then proceeded to punch the shark repeatedly before it swam off. A young doctor, who fortunately happened to be in the man's tour group, helped staunch the bleeding. The man was transferred by boat to the town of San Cristobal, a three-hour journey, where hospital staff reattached several ligaments in his legs. He has since returned to the UK for further treatment. The visitor site is currently closed to snorkeling as authorities assess the situation.

Sharks are a fairly common site in the Galapagos Islands and are a thrilling highlight of many snorkeling and SCUBA excursions. Yet, according sharkattackdata.com, there have only been seven unprovoked shark attacks in the islands since 1954. Last year, more than 200,000 people visited the islands and there wasn't a single shark related incident.

Below is a quick summary of previous shark attacks in the islands:

1954:  Fisherman standing on a submerged platform, bitten on the foot

1959:  Tuna fisherman swept overboard into a school of fish, bitten in the leg and foot

As you can see, in spite of this recent incident, shark attacks are exceedingly rare in the Galapagos Islands. Snorkeling and swimming are very safe and an incredible way to experience incredible encounters with islands' fascinating marine life.

Thank you to IGTOA board member Marc Patry from CNH Tours for bringing this story to our attention and providing some of the back research for this blog posting.