The Galapagos National Park Has a New Director 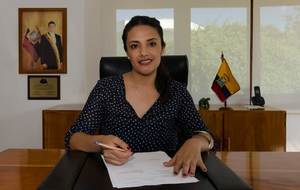 Late last week, Ecuador's Environment Ministry released a public statement announcing that Alejandra Ordoñez is replacing Dr. Arturo Izurieta as the director of the Galapagos National Park. In the statement, the ministry thanked Dr. Izurieta for his leadership. but did not elaborate on its reasons for replacing him.

Ordoñez has served as an advisor to Environment Minister Lorena Tapia and is just the second woman to hold the top position at the park. She has a Master's degree in public management, sustainability and competitiveness of tourism from the International University of Andalucia in Huelva, Spain. She previously served as the Provincial Director for the Ministry of Tourism and Director of Public Use at the Galápagos National Park, where she focused on improving conditions for tourists.

The park director position has been notoriously volatile in recent years. Between 2004 and 2007, 14 different directors and interim directors have sat at the park's helm.

Izurieta said on his Facebook page on Saturday that the decision was politically motivated, "Though I respect it, I do not necessarily agree with it."

Only time will tell if this change is a good one for the park. But at least Ordoñez, with her extensive background in Galapagos tourism, seems to be well qualified for her new job.