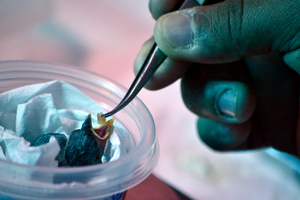 The future is looking slightly brighter for one of the world’s most endangered birds after the Charles Darwin Foundation's (CDF) recent announcement that it is once again hand rearing mangrove finch chicks in captivity.

With an estimated population of just 80 individuals and only 20 breeding pairs, the mangrove finch is perched on the precipice of extinction. They are found within two small areas on Isabela, which make species particularly vulnerable to disease outbreaks and changes in their environment. The finch has been hard hit in recent years by an invasive species of parasitic fly that feeds on finch nestlings. Researchers estimate that the mortality rate for affected finches is around 95%.

In February and March of this year, members of the team collected 30 mangrove finch eggs from nests at Playa Tortuga Negra on Isabela Island. The eggs were taken to the artificial incubation and captive rearing facility at the Charles Darwin Research Station (CDRS). The CDF announced that the eggs began to hatch in early March. The chicks are fed 15 times a day on a diet of “scrambled egg and papaya, introduced wasp larvae, moth innards and passerine pellets.” The chicks will be released back into the wild once they can feed on their own.

This will be the second year in a row that the mangrove finch team has successfully  hatched, reared, and released mangrove finch chicks back into the wild.

IGTOA and its member companies have been proud supporters of the Charles Darwin Foundation since 1996.