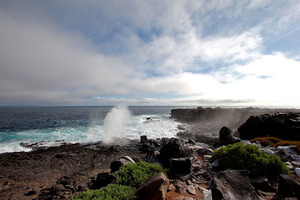 For many species—humans included—evolution takes place over the course of many thousands of years. Because of that, it’s rare to be able to witness the process, unless you’re a laboratory scientist studying quickly reproducing life-forms, such as single-celled creatures and some invertebrates.

But the Galapagos Islands, once again, have proved that they are, indeed, the “Enchanted Isles.”

In 2017, scientists were able—for the first time ever—to watch and document in real time the evolution in the wild of a completely new bird. And it took just two generations.

A brand-new species of Darwin’s finch that is endemic to the small island of Daphne Major has now been declared. Its discoverers have nicknamed it “Big Bird.”

So far, 18 species of Darwin’s finches—named for famed naturalist Charles Darwin—have been identified. All derived from a single, ancestral species that colonized the Galapagos one to two million years ago. The finches have since diversified into separate species, and changes in beak shape and size have allowed each one to utilize different food sources on the various islands.

And it’s two of these species that came together to create an entirely new one. 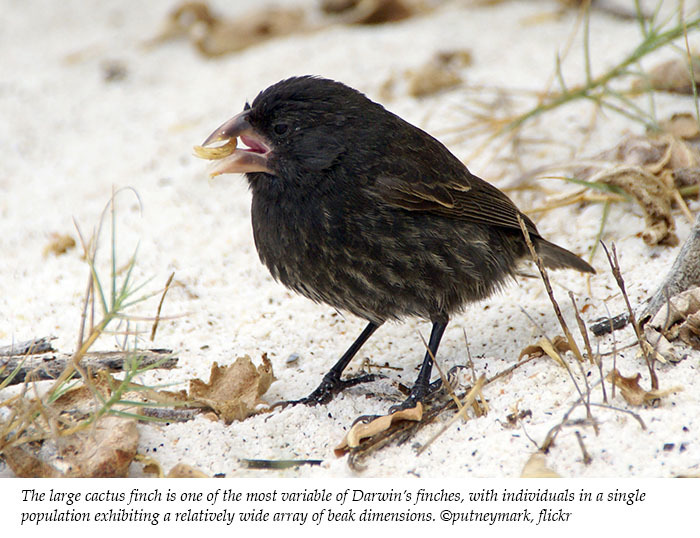 In 1981, when Peter and Rosemary Grant, evolutionary biologists at Princeton University, and a graduate student were working on Daphne Major, they noticed the arrival of an individual, non-native bird: a large cactus finch (Geospiza conirostris) from Espanola Island, which is about 62 miles to the southeast in the archipelago.

The newcomer was a male that sang an unusual song. He was also much larger in body and had a bigger beak than the three, resident species of birds. While the researchers didn’t see him fly in from over the sea, they noticed him shortly after he arrived. He was so visually different from the other birds on the island that they knew he did not hatch from an egg on Daphne Major. 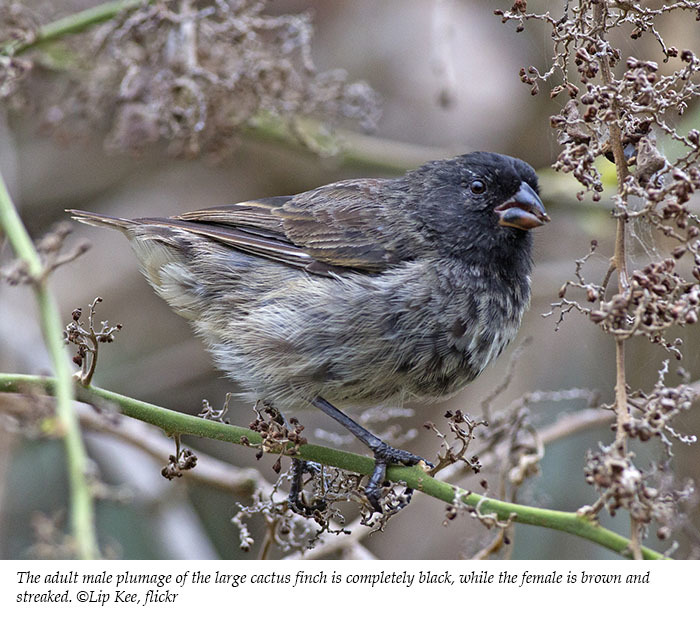 The remarkable distance that this finch traveled meant that he was not able to return home to mate with a member of his own species. So, over the years, he mated with two, female medium ground finches (Geospiz fortis), a species already on Daphne Major.

Offspring were produced, but such hybrids are often sterile—or reproduce with difficulty. Adding to that challenge, these “new birds” had songs (used to attract mates) that were unusual, reproductively isolating them further. These first offspring also differed from the resident species in beak size and shape, which is another major cue when choosing a mate.

As a result, in order to survive, the offspring mated with members of their own family tree. In the process, they strengthened the development of the new species.

The observations made by the Grants in the field, combined with genetic studies, showed that the Big Bird lineage happened in just two generations. Currently, almost 30 offspring continue to be studied.

The road to becoming wasn’t smooth or easy. In 2002–2003, when the new lineage was in its fourth generation, droughts on the island caused all but two of the birds to die.

Fortunately, when the rains came again, the brother and sister mated with each other and produced 26 offspring. Seventeen survived to breed (a son bred with his mother, a daughter with her father and the rest of the offspring with each other), producing a terrifically inbred genealogy. 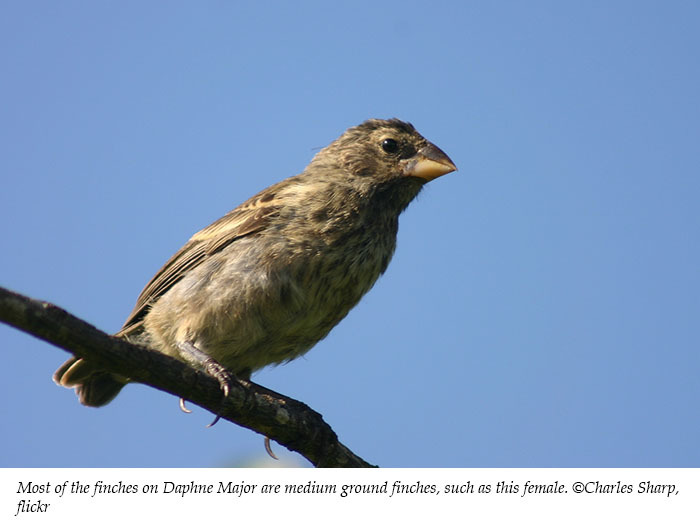 A critical requirement for speciation to occur through hybridization of two distinct species is that the new lineage must be ecologically competitive; that is, good at competing for food and other resources with other species. The size and shape of the Big Bird beaks compared with the beak morphologies of the other bird species inhabiting Daphne Major showed that Big Birds occupy their own niche. The combination of gene variants contributed from the two, interbreeding species, in conjunction with natural selection, led to the evolution of a form of beak that was competitive and unique. And because the hybrid finches were bigger than the native populations, they were able to access previously unexploited food resources and thus thrive.

Scientists had long believed that two different species could not produce fertile offspring capable of being recognized as a new species. The expectation was that hybrids would begin to reproduce with one of the other species on the island until eventually disappearing.

But after an analysis of the Big Birds’ population genetics, scientists were surprised to find that they are a closed reproductive group—after just two generations, creating a new native species. In fact, say the researchers, if a taxonomist came to Daphne Major today and knew nothing of its history, they would conclude that there are four, distinct species of finches on the island.

While no one can say for certain what the long-term survival of the Big Bird species will be, it does have the potential for continued success.

And that, they say, would delight Charles Darwin.

It was great to learn about the evolution of a new species. as a teacher of environmental science this information will be of great help to my students.