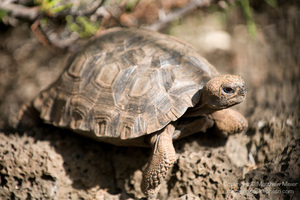 It appears that Pinzon is experiencing somewhat of a baby boom. Ten tiny-shelled saddleback tortoise hatchlings were spotted in December on the island. While this may not seem like a significant number, it is pretty remarkable when you consider that the island hasn't seen a single baby tortoise in over a century.

Not surprisingly, the absence of births is a result of human activity. When pirates and whalers arrived in the archipelago in the 17th century they unwittingly introduced rats to the islands.  The rats devoured tortoise eggs and hatchlings and pushed Pinzon's tortoises to the very brink of extinction.

The rats' impact was so great that a 1970 expedition to the island counted just 19 tortoises. This prompted a massive conservation initiative, which involved transporting adult tortoises to a special captive breeding center at the Charles Darwin Center on Santa Cruz. Once the captive tortoises were big and strong to withstand the predacious rats they were returned to Pinzon.

Still, as long as rats remained on the island there was no chance that eggs or hatchlings could survive. So in 2012 the park launched Project Pinzon, an ambitious and successful plan to eradicate rats completely from the island using traps baited with poison. Now the island appears to be completely rat free and safe, once again, for baby tortoises.