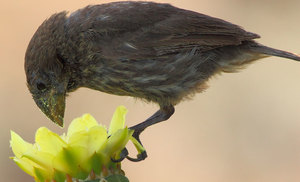 Have you tried the new flower diet? It seems to be sprouting up on menus all over the Galapagos for several species of land birds.

A Spanish-led study reports that 19 of 23 species of Galapagos land birds, including Darwin's famed finches, consume pollen and nectar from flowers. This expansion of diet across an entire community of species has never been observed before in nature, according to the researchers.

The study, which took place on 12 islands, spanned over four years and documented finches, mockingbirds and flycatchers visiting over 100 types of flowers for pollen and nectar.

The researchers speculate that the relative scarcity of seeds and insects -- the favored foods of land birds around the world --in the Galapagos forced the birds to be less selective about what they eat.

The paucity of insect life in the islands is something Darwin himself noted in The Origin of Species: “I took great pains in collecting the insects, but excepting Tierra del Fuego, I never saw in this respect so poor a country.”

A secondary finding of the research is that Galapagos birds play a larger part in pollination than previously believed. While bees are the primary source for pollination, birds in the study carried an average of 233 pollen grains.