Is another El Niño in the Forecast for the Galapagos? 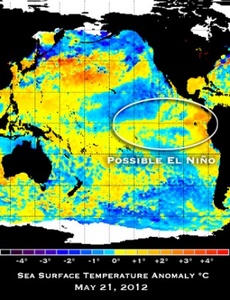 According to a s tory posted today on the website Earthweek, Australia’s meteorological service says its climate models indicate that the El Niño ocean-warming phenomenon may return later this year, replacing the stubborn La Niña that has affected global weather patterns over the past two years.

According to Australia's meteorological service, abnormally warm sea surface temperatures currently extend from the coast of Peru northward to Central America and westward beyond the Galapagos Islands.

A report issued by the Climate Prediction Center on May 3rd states that at least half of the “dynamical models” predict development of El Niño conditions by June through August, but cautions that there is considerable forecast uncertainty about whether these conditions will actually prevail. It goes on to note that the official forecast for July, August and September calls for ENSO-neutral (ENSO stands for El Niño-Southern Oscillation) conditions, which means neither La Niña nor El Niño conditions are likely to prevail.

In the Galapagos, the “Niño Flow” is an annual, normal slackening of the Humboldt Current; or more accurately, a seasonal reduction in the upwelling along the South American coast. It typically occurs around Christmastime, hence the name El Niño or “Christ Child.” Periods when this phenomenon occurs earlier or is more intense are known as “El Niño years.”

In an El Niño year, the southeast trade winds fail to show up, causing the Panama Current to stay in the islands, drastically warming the waters of the Galápagos. Upwelling stops, driving coldwater species to migrate or to go deeper. This influences the entire food chain and the breeding cycle of many species, including Galápagos penguins and marine iguanas, which feed off the upwelling. The last severe El Niño event in the Galapagos occurred in 1997-1998.

What does all this mean for visitors to the Galapagos? First of all, it’s important to remember that there is no guarantee that El Niño conditions will prevail anytime in the near future, and even if they do, they could be quite mild. But even severe El Niño conditions are not necessarily a reason to postpone your visit. While El Niño conditions can be tough on some marine species (such as marine iguanas, sea birds, sea lions, penguins, and flightless cormorants), they tend to favor other equally important and fascinating species, such as perching birds, land iguanas, and giant tortoises. And while you might experience more rain during an El Niño, warmer water temperatures can make for more pleasant snorkelling and swimming.

Our advice is to check with your Galapagos tour operator before your trip about the current conditions there, plan accordingly, and enjoy the magic of the Galapagos.