Pacific Reef Shark Populations in Swift Decline: 5 Things You Can Do to Help 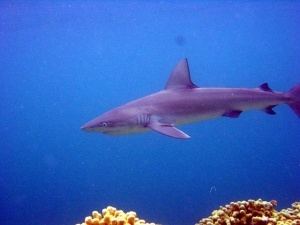 According to a study published in the April 27th edition of the journal Conservation Biology, up to 90% of reef sharks have disappeared from reefs near populated islands in the Pacific.

Sharks of the Galapagos Islands, unfortunately, are not immune. In 2011, authorities confiscated the bodies of at least 460 illegally killed sharks in two separate incidents within the Galapagos Marine Reserve. It is believed the sharks were killed for their fins to meet the growing demand among Chinese diners for shark fin soup.

According to National Geographic, over 40,000,000 sharks a year are killed for their fins. Some estimate s put the total catch as high as 100,000,000 sharks per year. Sharks are slow to reproduce and it is estimated that the populations of some species have plummeted by 95% in recent decades and that up to 1/3 of open-ocean species are threatened with extinction.

Currently only a handful of countries have shark finning regulations on the books (including the USA), but fewer still have outlawed the practice entirely and there are no laws restricting shark finning in the open sea. And even when regulations are in place, enforcement is often inadequate.

Five things you can do to help save sharks:

1) Boycott  restaurants that serve shark fin soup and write them letters telling them where you stand on the issue.

2)  Sign a petition to ban shark fishing and the sale of shark products in your community. Canadian citizen's click here.

3) Write your elected representatives and let them know you care about sharks and urge them to support shark conservation efforts.

4) Support organizations that are working to protect sharks. A couple of great ones that IGTOA and its members support are  WildAid and Sea Shepherd Conservation Society.

5) Create your own ' Ban the Fin' Campaign and educate your friends, family, co-workers and community about the destruction of sharks worldwide and encourage them to get involved.