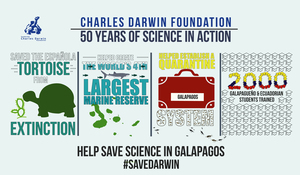 IGTOA is proud to announe that is has launched an emergency fundraising campaign on behalf of the Charles Darwin Foundation (CDF), which is facing a year-end budgetary crisis that could have a devastating impact on the organization’s efforts to preserve and protect the Galapagos Islands.

IGTOA, with the support of an anonymous donor, will contribute $2 for every $1 donated via a special campaign donation portal  before January 1st, 2015, up to $25,000.

The CDF is the oldest, largest and most important scientific research organization in the Galapagos Islands. Since 1959, CDF staff, researchers and visiting scientists have spearheaded some of the most ambitious and successful Galapagos conservation initiatives, including the first captive breeding program for giant tortoises. Once teetering on the brink of extinction, these iconic reptiles can now be seen in large numbers in the wild throughout the Galapagos archipelago.  The CDF also played a key role in establishing the Galapagos Marine Reserve, the world’s fourth largest, as well as helping to create a biosecurity agency to stop unwanted species from entering the Islands.

According to officials at the CDF, the year-end budgetary shortfall was preceded by the forced closure of the newly expanded and upgraded CDF gift shop by municipal authorities in July and the soaring cost of running its research station. You can read more about the closure here.

Swen Lorenz, Executive Director of the CDF, says, “We’ve worked tirelessly since November on a global fundraising campaign to avert bankruptcy. While there has been an outpouring of financial support from around the world, we still need additional funding to make our organization sustainable by the end of the year. We’re grateful to IGTOA and its member companies for their willingness to step up and help us get through this difficult time.”

The Galapagos Islands are one of the world’s most pristine oceanic archipelagos and are home to hundreds of species found nowhere else on Earth.  The islands’ unique biodiversity, which famously inspired Darwin’s theory of evolution by natural selection, face a variety of threats, including invasive species, illegal fishing and poaching, and the impacts of development. Over 200,000 tourists are expected to visit the islands this year.

Lorenz says the current budgetary shortfall could impact some of the CDF’s most important initiatives, including a captive breeding program for the critically endangered mangrove finch, as well as efforts to eradicate invasive insects and plants that threaten the iconic, endemic species of the archipelago.

Our member companies believe that the Galapagos tourism industry has an obligation to help ensure that the CDF has the funding it needs to fulfill its critical mission. Our goal is to raise $25,000 from donors before the end of the year and provide an additional $50,000 in matching donations to the CDF. To make a donatoin visit  http://www.igtoa.org/support_the_cdf.