The Charles Darwin Research Station May Soon Shut Down 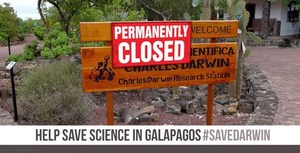 The General Assembly of the Charles Darwin Foundation is voting today on whether to permantly close the Charles Darwin Research Station (CDRS) by the end of the year, because of financial troubles and a feud with the local government over the new CDRS gift shop. The station is the oldest, largest and best known research institution in the Galapagos and has played a critical role in helping to solve many of the biggest and most difficult conservation challenges in the islands over the past five decades.

IGTOA has been a proud financial supporter of the Charles Darwin Foundation and the station, which it operates, for many years. We sincerely hope that a shutdown will be avoided and that the station will continue on with its mission of providing "knowledge and assistance through scientific research and complementary action to ensure the conservation of the environment and biodiversity in the Galapagos Archipelago."

One of the issues at hand is the closure of the station's recently enlarged and updated gift shop, which openened in February. Municipal authorities shut it down in July, depriving the station of hundreds of thousands of dollars in operating revenue. Authorities claim that the CDRS changed the scope and scale of the gift shop after its initial approval and that it does not have the legal authority to operate. There is little doubt that the decision was made to appease local shopkeepers, who don't want to have to compete with the gift shop at the station, which is one of the biggest tourist draws in the islands.

Swen Lorenz, who has held the top post at the CDF since 2011 and is a regular guest and speaker at IGTOA's annual meetings, comes from a succesful background in international finance. His efforts in recent years to put the CDRS on sounder financial footing and improve the quality of visitor experience have been nothing short of heroic. The gift shop was part of a longterm plan to create steady sources of unrestricted funding for the station. Part of the problem is that the station relies heavily on the generosity of big donor organizations, which usually earmark their support for specific research projects and conservation initiatives. These funds can't be used to pay administrative salaries, or general operating expenses such as electricity, maintenance, water, phone service, or internet.

You can learn more about the issue on the websites of Science Magazine and Galapagos Digital.

We are in contact with Lorenz and monitoring the situation closely. Depending on the outcome of the General Assembly's decision later today and upon request from the CDF, we may soon launch an aggressive fundraising and advocacy campaign in support of the station. Please stay tuned for more information.