Human Healing May Be Hiding in Galapagos Cormorant Wings 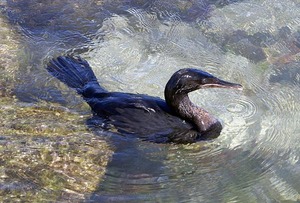 Of the approximate 40 species of cormorants found around the world, the Galapagos cormorant is the only one which cannot fly. The unusual stunted wings of this bird are only one-third the size of what would be required for flight.

When visiting the islands, you may see the distinct silhouettes of Galapagos cormorants, standing with outstretched wings on the beaches and lava shorelines of eastern Fernandina and northwestern Isabela. Because their wings produce very little oil, they aren’t fully waterproof. So, after a dive, opening up their wings to dry is a necessity for the birds. Currently, there are about 1,000 breeding pairs of Galapagos cormorants on the two islands.

It’s thought that because the cormorants have very few land predators, natural selection led to dropping functional wings in favor of expert underwater skills, such as diving and swimming. The shorter wings still do come in handy for balance when the birds jump from rock to rock, and they could be an advantage during diving by decreasing buoyancy. But unlike penguins, however, Galapagos cormorants don’t “fly” underwater. They tuck in their wings and kick with their powerful hind legs, using their flexible necks to spear fish and octopuses from inside small refuges in the reefs and rocks.

Recently, with the help of advanced technology, researchers were able to sequence the Galapagos cormorant’s genome to find out how its intriguing flightlessness evolved. And in the process, they think they may have discovered the genetic mechanisms underlying the evolution of limb size that could eventually lead to new treatments for humans with skeletal genetic disorders. 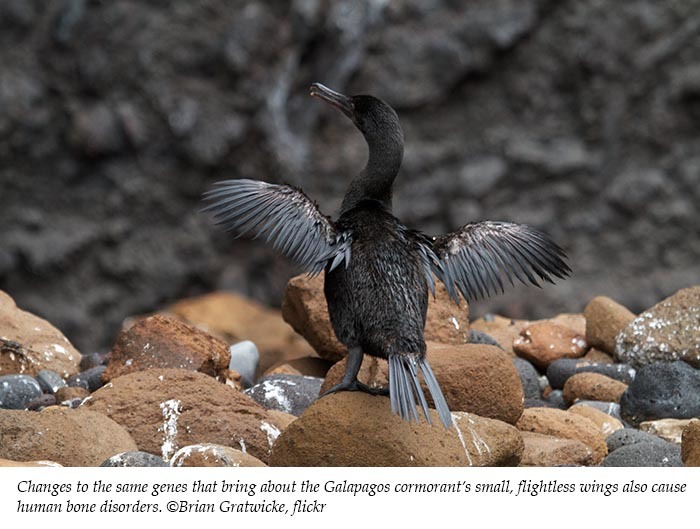 Cilia are the site for chemical messages

Flightless birds have fascinated evolutionary scientists for more than a century. Emus, kiwis, ostriches and penguins have all had their inability to fly explored, from bones to feathers to muscles. But geneticists have a unique opportunity to investigate the genetic roots of flightlessness with Galapagos cormorants since the birds had a flighted ancestor just 2 million years ago—an incredibly short time in evolutionary terms. In contrast, the last time kiwis and ostriches had flighted relatives was many millions of years ago. The more recent split suggests that a relatively small number of genetic changes differentiate high-flying cormorants from their earthbound cousins.

Just about two years ago, in June 2017, a paper published in the journal Science found that when researchers compared Galapagos cormorant DNA to three related, flighted species—the double-crested cormorant, the neotropic cormorant and the pelagic cormorant—there was a distinct mutation found around genes that regulated the formation of cilia, the microscopic, hairlike extensions used to convey chemical messages between cells that control skeletal development. These signals are needed for bones to fully mature in both birds and humans.

This function appears to be delayed in the cilia of Galapagos cormorants, suggesting a route for flightlessness to evolve rapidly. What’s fascinating to researchers is that the changes to the genes that shortened the Galapagos cormorant’s wings are the same genes that go awry in a group of human bone disorders called ciliopathies, characterized by shorter arms and legs, small ribcages and misshapen skulls. Thus, these findings have the potential to lead to new treatments for people with skeletal ciliopathies. 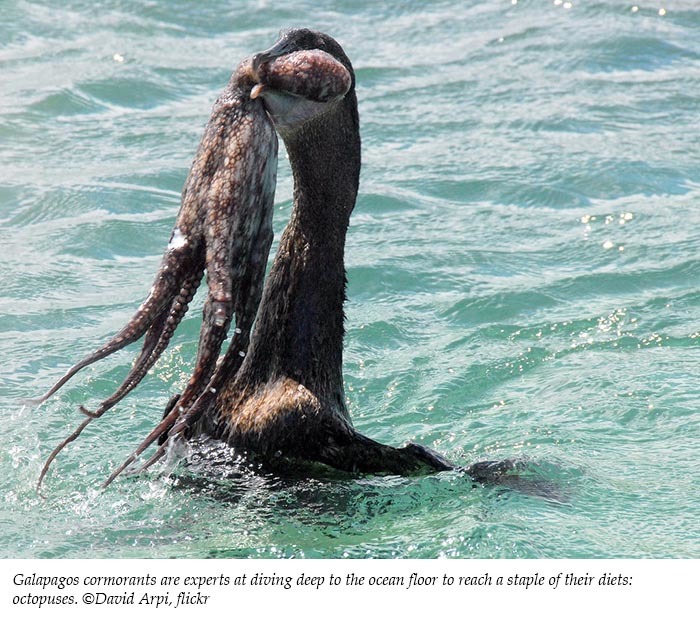 Wings are the locus for learning more

The connection between these genes and flightnessness is still a hypothesis, however. To truly prove the thesis, researchers would have to make a Galapagos cormorant fly or make another cormorant unable to fly, which one day could be done with a tool such as CRISPR gene editing. As technologies improve, we may be able to test these gene mutations in birds and watch their wings develop. 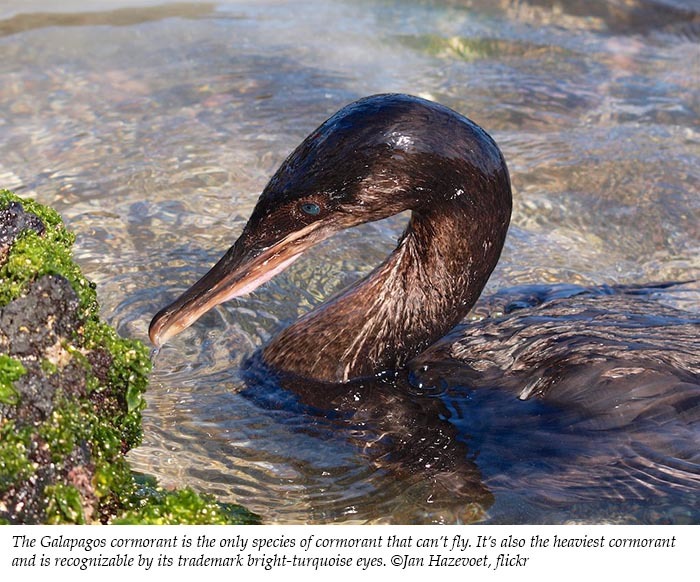 Another danger is oil spills, which could have a huge impact on Galapagos cormorants if the spills were to reach the seas around Fernandina and Isabela Islands. Marine plastic pollution causes great harm to the birds, both through ingesting it and through being entangled by it. In addition, nest flooding and volcanic eruptions can decrease Galapagos cormorant populations.

It appears that protecting and conserving these remarkable birds has just taken on an added significance; for the small, shortened wings of the Galapagos cormorant not only represent the one-of-a-kind nature of the mesmerizing Galapagos Islands but some very important health benefits that are lying in wait for us—just beyond the edges of our knowledge.

Feature image: On the surface, Galapagos cormorants sit very low in the water, with only their necks visible from a distance. ©putneymark, WikiCommons

Here's to you, Candy, that writes about the need for wild things. Thank you.

Thank you for the kind comment, Richard. I appreciate your readership.