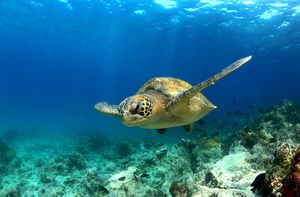 Earlier this year, IGTOA provided over $150,000 in grants to organizations working on the frontlines of Galapagos conservation. Recently, grant recipients were asked to provide an update on the status of the projects for which the grants were awarded.

The Charles Darwin Foundation (CDF) received $25,000 to study the movements and behavior of green sea turtles in order to find ways to reduce deadly boat strikes, which have become increasingly common as tourism to the islands has increased in recent years. You can read the original grant application here , grant status report here. The total estimated cost of the two year project is $129,000.

IGTOA's funds were to be used to pay the salary of the project assistant, a local early career biologist, who had already been trained to perform deployments, analysis of data and outreach activities. Some of the funds were going to be allocated to cover the cost of field trips, including hiring a boat to travel to the study site, meals for camping at the nesting site “Las Bachas” and inter-island trips to perform outreach activities in other inhabited islands, Isabela and San Cristobal. The remainder of the grant was to be used to purchase a computer for a professional volunteer to design interpretative material and to cover printing costs and to cover attendance to conferences (i.e. the 40th International Sea Turtle Symposium, Cartagena, Colombia in March 2020 and the Annual Ecuadorian Biological Sciences Conference 2020, date and place to be confirmed) as well as training for the project assistant and the project leader.

Because of the Covid-19 pandemic, the international conference and planned outreach activities have been cancelled and the CDF has thus far spent just $3,324 of the allotted $25,000. The funds were used to purchase a computer and cover some operational costs associated with the project. According to Holly Torres, Grant and Donor Relations Officer for the CDF, the remaining funds will be used to fund future outreach efforts once they are willing to resume normal activities.

Still, progress has been made. The CDF team was able to successfully complete data collection between January and March. This included tracking one nesting female green turtle using a multichannel data logger to record her behavior while at sea. The data logger (CATScam) used includes several sensors to measure temperature, depth, position of the animal, and has an HD camera and a built-in hydrophone. Additionally, the team deployed time-depth recorders (TDRs) on three other nesting female green sea turtles to gather their diving profiles. Both sets of data will be used to build the collision risk model for sea turtles in key habitat areas within the Galapagos Marine Reserve.

Now they are analyzing the data and have completed the soundscape characterization at seven locations around Santa Cruz Island. Currently, these results are being compiled in a technical report to be delivered to the Galapagos National Park Directorate. Simultaneously, they have been analyzing data from a vessel monitoring system provided by the Galapagos National Park Directorate to characterize marine routes within the GMR. This will identify areas of the archipelago with a high probability of boat strikes on sea turtles. This analysis is scheduled to be completed by the end of this year. You can read a summary of the underwater soundscape characterization and activities conducted thus far, here.