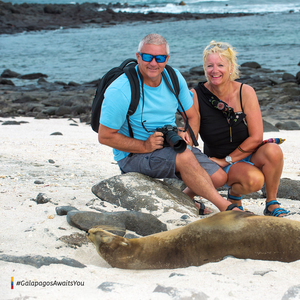 Ecuador's Vice President, Otto Sonnenholzner, declared the Galapagos Islands to be the first Ecuadorian province to be COVID-19 free and announced plans to reopen the the islands to tourism on July 1, according to an article published today on the Ecuadorian website Clarin.

The islands have thus far escaped the worst ravages of the pandemic from a health perspective, with just 76 confirmed cases and one reported death, in spite of the fact that Ecuador has been particularly hard hit among South American countries.

Still, the economic impact of COVID-19 has been severe since the island was locked down in mid-March.  The vast majority of the islands' 30,000 residents rely on tourism, either directly or indirectly, for their livelihoods. Last year, 275,000 tourists visited the islands and by some estimates tourism accounts for 75% of the islands' economic output.

There are reports circulating that visitors will be required to show proof of a negative COVID-19 test upon arrival in Ecuador taken within the last 72 hours. This may be challenging, given the current shortage of testing kits, at least in the US.  The idea of allowing direct international fights into the islands has also been suggested. Currently, flights to the Galapagos originate in Quito and Guayaquil on Ecuador's mainland.

The challenge now, of course, is to weigh public safety and the need to prevent an outbreak in the islands against the social and economic impacts of remaining closed to tourists.