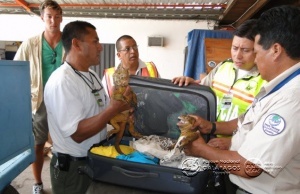 A German citizen who was caught trying to smuggle four iguanas out of the Galapagos Islands has been sentenced to four years in prison, according to the director of the Galapagos National Park.

The International Union for the Conservation of Nature lists the Galapagos land iguana as 'vulnerable, or one step short of endangered.

Bender, who is 32, admitted during his trial that he had been detained in Fiji in 2001 for attempting to smuggle iguanas, the park directors said.

In August a judge denied Bender bail, a decision that Sea Shepherd Galapagos hailed as a huge win for conservation and wildlife protection, noting that it was the first time since the enactment of the Special Law for Galapagos in 1998 that an individual had been jailed for committing environmental crimes.

He will serve his sentence at a prison in the mainland coastal city of Guayaquil.

Sea Shepherd Galapagos, which had been monitoring the case and providing legal arguments for the prosecution, recently received a $10,000 grant from IGTOA in order to help them strengthen the enforcement and prosecution of environmental crimes within the Galapagos Marine Reserve.

IGTOA commends the court for sending a strong message to would-be offenders that environmental crimes will not be tolerated in the Galapagos.