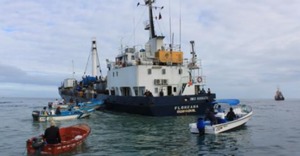 A 180-day state of emergency was declared in early February, after the cargo ship Floreana hit rocks in San Cristobal’s infamous Wreck Bay on January 28, 2015. The Floreana was carrying a significant cargo load that included approximately 13,000 gallons of fuel.

A containment barrier and absorbent material has been placed around the Floreana, according to a press release from the Galapagos National Park.  Park rangers, along with the personnel from the Ecuadorian Navy are constantly monitoring the site. Crews monitoring the site did notice a liquid escaping from the Floreana. Samples of a substance leaking from the vessel were taken and flown to Quito for testing. Until the results can conclusively confirm there is no contamination, the Park has closed three surfing spots.

At this time, “There is no kind of environmental damage. The greatest danger has passed since the ship ran aground. There has not been any fuel spilled,” said Galapagos governor Jorge Torres in a telephone interview with The Wallstreet Journal. However, the 180-day state of emergency is necessary, as it will allow the Park to implement the appropriate measures to ensure the safety of the marine and coastal eco systems.

This is certainly not the first time a cargo ship has failed to pass through the infamous bay. As recently as May of 2014 another freighter, the Galapaface I, ran aground in Wreck Bay, also known as Ship Wreck Bay, located off the coast of San Cristobla, which is the eastern-most of the inhabited islands in the archipelago. However, both of these accidents immediately draw comparisons to the 2001 grounding of the Jessica, an oil tanker that also hit rocks in the very same Wreck Bay in 2001 spilling 175,000 gallons of diesel and fuel oil. The grounding of the Jessica is still considered one of the most catastrophic environmental disasters in the Galapagos.

The monitoring is ongoing and we will keep you posted on any new developments. In the meantime, it may be worth asking why this sort of thing continues to happen. At the very least, it seems like authorities may want to reconsider whether it makes sense to allow freighters carrying potentially harmful cargo to pass through such treacherous waters.

Photo taken by: the Galapagos Governement