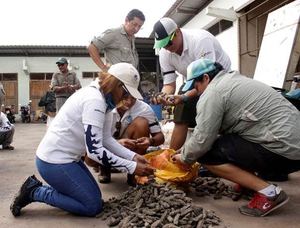 A Galapagos resident was sentenced to three years in prison on the mainland earlier this month for the possession and transport of the 3,712 sea cucumbers. The three members of the Seventh Criminal Court, located in the province of Guavas   found the defendant "Jonathan V. Citizen"  guilty after just two days of hearings. According to the Galapagos National Park Directorate, the defendant was apprehended by park rangers at the Baltra airport on January 21st of this year with the contraband.

The sea cucumber, an animal closely related to the starfish, is a protected within the Galapagos Marine Reserve and is considered an endangered species by the International Union for Conservation of Nature (IUCN). The 1998 Special Law for Galapagos banned the harvesting of cucumbers, but, controversially, in 2011 authorities began opening up limited sea cucumber harvesting seasons. In July of 2011 alone, fishermen harvested 544,711 sea cucumbers as part of 60 day open season.

The sea cucumber trade is driven by demand in Asia. Many people, particularly in China, believe that sea cucumbers possess medicinal and aphrodisiacal properties.

While a single conviction may to seem like a big deal, it is. In years past, defendants in Galapagos environmental crime cases routinely escaped justice. IGTOA has been proud to provide significant financial support to Sea Shepherd International's efforts to improve judicial response to environmental crimes committed within the Galapagos Marine Reserve. These efforts appear to be paying off.