A Sad Farewell to the San Cristobal Vermillion Flycatcher 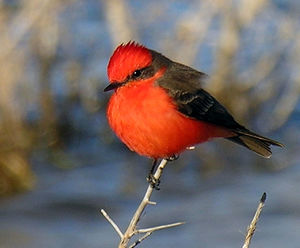 Scientists have confirmed the first extinction of an endemic bird species in the Galapagos Islands since humans first arrived in the archipelago hundreds of years ago. The San Cristobal vermillion flycatcher (Pyrocephalus rubbings), which was only recently identified as a distinct species, hasn't been seen on the island since 1987. Recent searches for the species failed to turn up any evidence that it still exists.

Vermillion flycatchers can be found across parts of North and South America, including several subspecies in the Galapagos Islands. But a study of museum samples earlier this year revealed that the San Cristobal vermilion flycatcher, once classified as a subspecies, was actually genetically and morphologically distinct from its nearest relatives, which lead taxonomists to reclassify it as a different and distinct species. Researchers speculate that some of the remaining flycatcher subspecies in the islands may actually be distinct species as well.

No one knows exactly caused the extinction, but scientists strongly suspect that the culprits are invasive rats, which feed upon bird eggs, and Philornis downsi, an invasive species of fly whose larvae feed upon hatchlings in the nest. Philornis has driven other Galapagos bird species, including the mangrove finch, to the very brink of extinction.

The disappearance of this beautiful bird is a powerful reminder of just how fragile these islands are and how just one introduced species can have a devastating impact. That's why IGTOA and its member companies are proud to support critical conservation initiatives aimed at preventing the introduction of new invasive species to the islands. Most notably, we've provided the non-profit WildAid with $78,000 in grants since 2012 to help improve the biosecurity of the archipelago. The new system, when complete, will include improved mainland and island port facilities, training of biosecurity inspectors, state-of-the-art equipment, improved cargo handling procedures, and higher cargo vessel standards for ships entering the Galapagos archipelago.