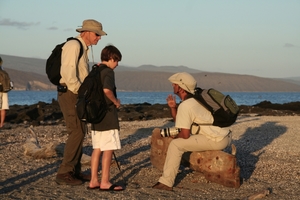 The Galapagos National Park has completed an analysis of data provided by visitors who entered the protected areas of the Galapagos archipelago in 2014 and released some of the initial findings yesterday.

Perhaps the most interesting bit of information in the report is that in spite of the fact that about 11,000 more people visited the islands in 2014 than in 2013, the number of people who went on a cruise actually decreased slightly last year. Only 35% of visitors participated in a multi-day cruise, while the remaining 65% primarily used land-based accommodations. This is significant because the popularity of land-based tours has been skyrocketing in recent years and the trend does not seem to be abating. As recently as 2009, about 50% of visitors participated in cruises.

The report also states that 70% of Galapagos visitors came from abroad, while 30% were Ecuadorian. US citizens made up the largest contingent of foreign visitors, at 26% of the total, followed by Britain at 6%, and Canada, Australia and Germany (each at 4%).  The remaining 23% of visitors were made up of 153 other nationalities. These numbers are fairly consistent with previous years.

The full annual visitor report will be published in a few weeks.