First Time in the Galápagos: Conservation Issues Get Real 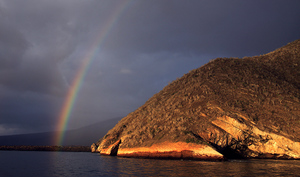 Those of us who travel often find out that there is no better way to prove yourself, to test your most fondly held beliefs, and to discover which issues mean the most to you than by stepping outside your normal routine and comfort zone. So when I had an opportunity to travel to the Galápagos Islands in January, I felt I was up to the challenge of venturing about as far away from my everyday life as I could get.

My Januarys — in Wisconsin, where I live — are typically filled with snow, below-freezing temperatures, Arctic cold fronts, more snow, and — as a result — snow blowers. Going to the Galápagos for a Midwesterner like me was going to be akin to traveling to the opposite end of the Earth.

Standing on another place — or in another time

Before I left home, I knew that the Galápagos and Ecuador were going to be hot; after all, we would be crossing the Equator four times in our weeklong tour. And prior to leaving, I had read about the challenges the islands face; about the invasive plant, animal, and insect species and the work that’s being done to eradicate them; the ever-increasing population; and the historical overfishing in the marine reserve.

But environmental threats such as these didn’t have an immediate meaning for me until my small group of about twenty travelers was on Bartolomé Island, a place where the landscape could just as easily be described as a “moonscape.” Among the volcanic cones and lava tubes, I could also readily envision standing on planet Earth when it was new, before beings like me were even an idea. It became clear to me in a way that couldn’t be shown in a book why the islands had become one of the United Nations Educational, Scientific, and Cultural Organization (UNESCO)’s original twelve World Heritage Sites in 1978: to protect such an extraordinary place from land development and exploitation of its biological species. 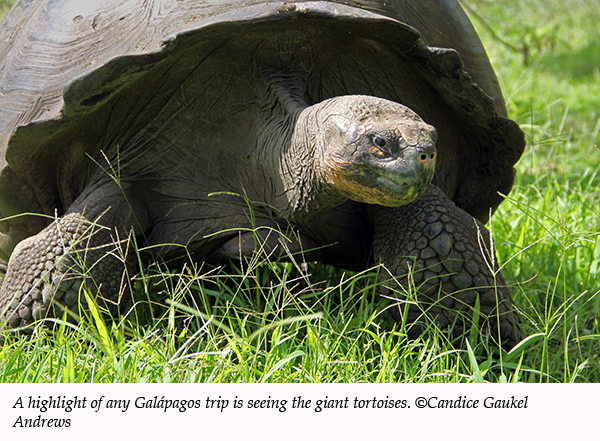 Of course, the highlight for most visitors to the Galápagos is seeing the giant tortoises. Photos and stories about them are published around the world. But when I got to the islands, I learned that the best opportunity to see them (without having to scale a volcano) is to go to a preserve. It gave me pause to think that this icon of the islands is difficult to find in the wild anymore. While it was gratifying to later see small tortoises in pens at the Charles Darwin Research Station, where they were being reared so that they could eventually be retuned to their native islands, the experience pointed up just how much has already been lost due to human presence.

For a northern-climate-born person like me, though, I will admit that I found the Galápagos sun unrelenting. I had brought along my Wisconsin “summer clothes,” which basically consist of lighter, long-sleeved shirts and three-quarter-length pants, rather than my usual down-to-the-ankle jeans. The big surprise was that I turned out to be the smartest packer. Many of my fellow travelers commented that they had brought along sleeveless shirts and shorts only to find they couldn’t wear them due to the intensity of the sun. It seems I had blundered my way into being the group’s savviest island traveler. 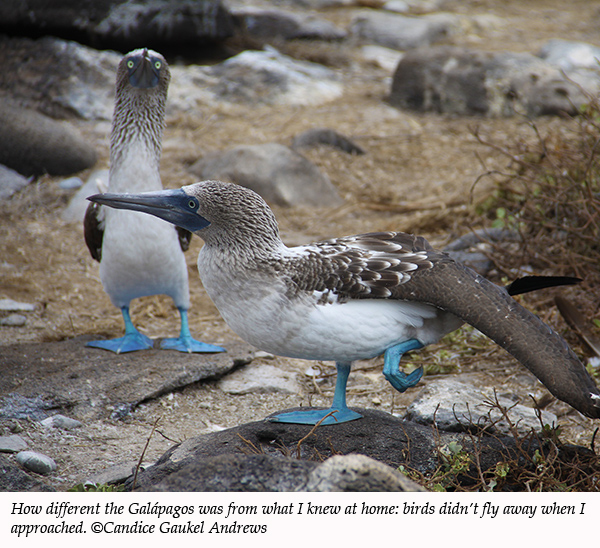 In spite of my cover-ups, I did get a remarkable “Teva-tan” on my ankles and feet — the sections of my lower limbs that my pants failed to cover and that showed through the straps of my sandals. Those parts ended up with a ruby-red burn, but I felt it was a small price to pay for the natural wonders I was seeing: birds that don’t fly away when I approach, sea lions who come up to greet me, and iguanas that I swear posed and smiled for my camera.

My experience in the Galápagos has made me think that sometimes when choosing a travel destination, playing “opposites” will bring you the most reward. Think of where you live and what you’d usually be doing at that time of year, then go to the opposing corner of the globe: in temperature, latitude, and culture. I now know that it makes for an eye-opening journey.

In one day’s time, I had left the morning sun of Ecuador behind and was back in the cold of a Midwest winter night. We’d had a snowstorm while I was gone, and it was time to start up the snow blower. Talk about culture shock. 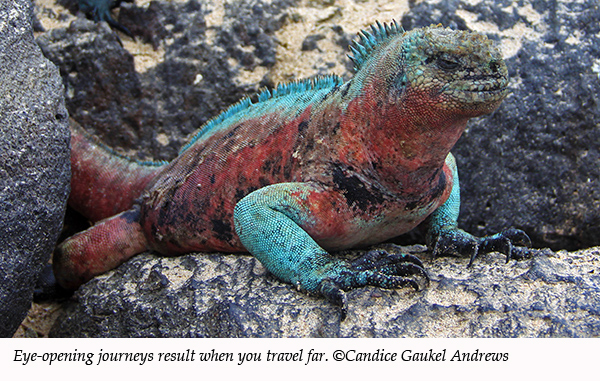 But this time when I was pulling that engine’s cord, I somehow felt different. I wondered what the temperature was like at the Equator at that moment; who now was witnessing the moonscape on Bartolomé? Did a lightbulb just go on over that person’s head — like it had over mine — about how essential to our spirits World Heritage Sites are? Were the small tortoises I saw growing up at the Charles Darwin Research Station thriving; were they being carefully watched at this second so that they avoided harm and could one day be returned to their native islands to repopulate them?

And, isn’t it amazing, I thought, that this time under the ankles of my snow pants and inside my Gore-Tex boots lurks the hard-earned tingle of a sunburn and peeling skin.