Africa Berdonces is the New Director of the Galapagos National Park 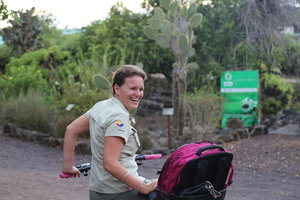 Africa Berdonces was quietly named the new Director of the Galapagos National Park on Friday. She replaces Walter Bustos, an official from the Ministry of the Environment, who served as interim director for the past four months.

Berdonces, whose family moved to the islands when she was an infant, received a master’s degree in environmental studies from James Cook University in Australia. She is the third woman to hold the park's top job.

"This is my passion,”  Berdonces recently said in an interview. “I studied for this. I’ve been a national park guide. I’m a dive master. I’m from a family in the tourism business. I know the business of the Galápagos from inside.”

Given her deep ties to the islands and her background in both conservation and tourism, Berdonces, who is just 30 years old, seems like a solid choice for this difficult, important and highly volatile position. She is the fourth park director in the last two years. Last April, Dr. Arturo Izurieta was replaced by Alejandra Ordoñez, who was replaced by Walter Bustos earlier this year. This lack of stability in park leadership is worrisome at this critical time in the park's history, as officials continue to grapple with the complex issue of how to manage tourism growth in the islands.