Delivering a Letter to the Galapagos National Park 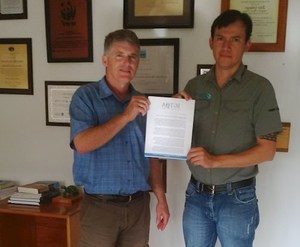 Last week, IGTOA board member Marc Patry of CNH Tours delivered a letter from IGTOA to the director of the Galapagos National Park, Jorge Carrion, stating our organization's support for an across the board increase to the national park entrance fee.

In August, the park announced that it was considering a fee increase in 2020. The current fee ($100 for non-Ecuadorian visitors) has been in place for roughly 30 years and is significantly lower than fees charged by other top nature destinations around the world. IGTOA supports the fee increase as a means to help curb out-of-control tourism growth and to help generate much-needed revenue for park management and conservation.

The number of annual tourist arrivals has increased from 173,000 to 276,000 (60%) just since 2010. According to UNESCO's World Heritage Committee, this growth poses a direct and immediate threat to the biosecurity of the archipelago. Increased tourist arrivals and the concomitant increase in the size of the local population have resulted in ever-increasing cargo shipments and air traffic, the primary vectors for the arrival and dispersal of new invasive species from the mainland. One hundred percent of tourism growth in the past decade can be attributed the increasing popularity of land-based tourism, which, unlike ship-based tourism has not been effectively regulated or controlled.

You can read more about the issue of tourism growth and our reason for supporting the increase on our blog here.

IGTOA's member companies voted to ratify an official Tourism Growth Position Statement in October, 2016. It stated our support for an increase in park fees as a way to help curb explosive tourism growth while maximizing the benefits of tourism to the local economy. Recently, we sent a survey to our member companies concerning the park fee increase and again found overwhelming support in favor of the increase.