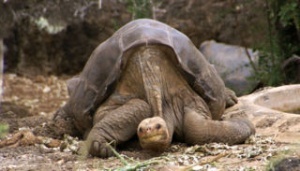 Lonesome George, the giant tortoise that became the beloved international symbol of the Galapagos Islands passed away yesterday in his pen at the Charles Darwin Research Station. Scientists estimate that he was around 100 years old.

According to Galapagos National Park officials, Fausto Llerena, George’s keeper for 40 years, found him dead in his corral. With George’s passing, the La Pinta subspecies of giant tortoise is now considered extinct.

A Hungarian scientist discovered George on the island of La Pinta in 1972. It was previously believed that his subspecies (Chelonoidis nigra abingdoni) was extinct. For decades, attempts were made to get George to breed with females from a closely related subspecies but were unsuccessful.

Tortoises were plentiful on the Galapagos Islands until the late 19th century, but were then hunted to the brink of extinction for their meat by sailors and fishermen. Their populations continued to suffer after goats, which were introduced from mainland South America, decimated their habitats.

As the sole surviving member of his subspecies, Lonesome George’s plight as the earth’s rarest creature captured worldwide attention and made him a conservation icon and a powerful symbol of the tragedy of extinction. His passing is an urgent reminder that it is more important than ever to support conservation in the Galapagos. While nothing can be done now to bring back George’s kind, there are many other endemic Galapagos species that face the very real threat of extinction, including the Floreana Mockingbird and the Mangrove Finch.

Older: Is another El Niño in the Forecast for the Galapagos?
Newer: Ecuador's Tourism Industry Launches #EcuadorAwaitsYou Campaign to Showcase its Beauty and Culture
Blog Home