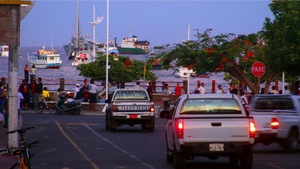 Ecuador's Ministry of Tourism released 2018 visitor statistics for the Galapagos Islands a few days ago and the news isn't good for those of us who are concerned about tourism growth. According to the report, 275,817 people visited the islands last year, a 14% jump over the previous year. Since 2007, annual visitor arrivals have increased by a staggering 70%.

Because the total capacity of passengers ships in the islands has remained stable over the years and because ship-based tourism has been in a slow decline, it is safe to assume that 100% of the increase is due to the growing popularity of land-based tourism. This means that land-based tourism increased by more than 20% last year. Since 2007, it has increased by 156% (from about 79,000 visitors in 2007 to 202,000 in 2018) while ship-based tourism during that time decreased (from about 82,000 to about 73,000, or 11%). Unlike ship-based tourism, which has been carefully controlled and regulated since the 1970s, with strict limits on the number of passenger vessels allowed to operate, there are currently no such regulations governing hotel development or capping the number of land-based tourists. While a moratorium on new hotel development was put into effect in 2015, the construction of hotels that had already been permitted continued through 2018.

If the current growth rate continues, 1 million people will visit the islands in 2038, which is shocking when you consider that 20 years ago, only about 60,000 people visited the islands each year.

(For an interesting read and a much deeper dive into this issue, check out Marc Patry’s excellent piece on tourism growth here. Marc is an IGTOA board member who spent several years working for UNESCO in the Galapagos Islands.) 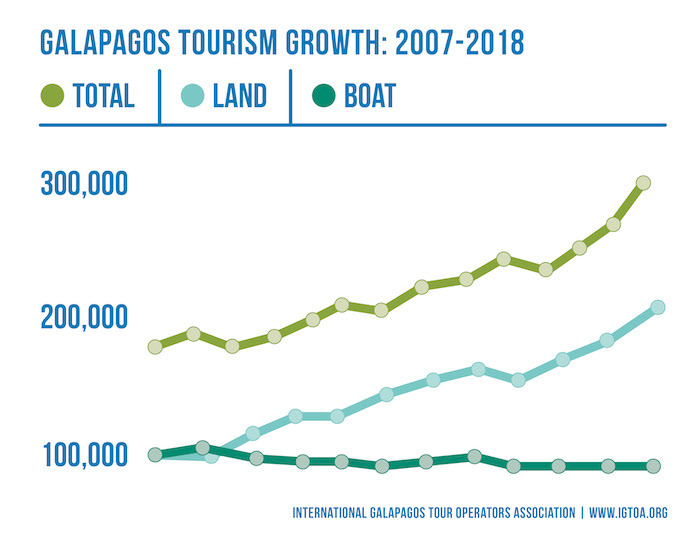 In February, 2018, IGTOA sent a letter to Ecuador’s Tourism Minister, Enrique Ponce de León, stating our position that the current rate of tourism growth may not sustainable. In the letter, we asked the government to regulate land-based tourism as carefully and effectively as it has regulated ship-based tourism. We also expressed our belief that if tourism continues to grow at its current rate, the very attributes that have made the Galapagos Islands one of the world’s premiere nature destinations could be in peril due to increased risk of invasive species, overdevelopment, and other threats.

Sadly, while our letter attracted the attention of The New York Times, El Universo (one of Ecuador’s leading newspapers), and other media outlets, visitor arrivals have climbed higher yet again and we are left wondering when this issue will finally be addressed. A zero-growth tourism policy that has been articulated by some in the government in recent years, yet at this point no such policy officially exists. While we applaud the efforts that have been made thus to curb future tourism growth, including the current moratorium on new hotel development, we hope further action will be taken to stabilize growth and ultimately place a firm cap on the total number of visitors.

In truth, this may not be as easy as it sounds. As of last count, about 25,000 people live in the islands. Tourism, whether directly or indirectly, provides livelihoods for most of them. As land-based tourism has grown, so has the resistance to limiting it. But one thing we know from studying other once-pristine tourist destinations around the world is that genies don't willingly go back into their bottles.

To be fair, this is a complicated problem and there are no easy answers. Still, IGTOA firmly believes that the needs of local people and visitors can and should be balanced with the obligation that we all have to protect this unique and remarkable place. To this end, we stand at the ready to provide whatever assistance we can in helping to find a sensible and sustainable solution to this issue.

cialis prices
about 1 year ago