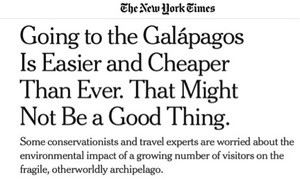 Earlier this week, The New York Times featured an article titled, "Going to the Galápagos Is Easier and Cheaper Than Ever. That Might Not Be a Good Thing," about the perils posed by land-based tourism to the Galapagos Islands. You can read the story here.

Journalist Adam Popescu interviewed IGTOA's president, Jim Lutz, for the article. Said Lutz, "It is simply not sustainable to have never-ending growth in land-based tourism in this fragile environment."

This is the second time within the past eight months that The Times has published a story on land-based tourism growth in the Galapagos featuring IGTOA and its efforts to bring awareness to the issue. We are happy that it is finally starting to get the attention it deserves.

The first article, which ran last June, was prompted by a letter sent by IGTOA to Ecuador's minister of tourism asking the government to regulate land-based tourism as effectively and stringently as ship-based tourism has been regulated since the 1970s. Unfortunately, no new regulations have since been implemented.

From 2007 to 2018, according to Galapagos National Park statistics, overall visitor arrivals increased from about 161,000 to more than 275,000 (70%). During that same period, the number hotels in the islands increased from about 65 to more than 300 and the number of visitors participating in land-based tours increased from around 79,000 to 202,000 (155 percent). During this time, ship-based tourism actually decreased, from approximately 82,000 visitors to just over 73,000 (an 11% percent drop). If the current rate of land-based tourism growth continues, the islands will receive one million visitors by 2038.

IGTOA in not against land-based tourism. In fact, many of our members sell land-based tours. We simply believe that tourism as a whole must be managed very carefully in order to ensure that it doesn't do lasting damage to the Galapagos Islands.