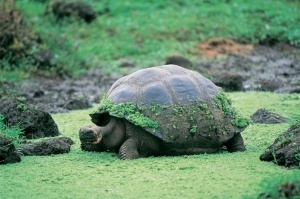 When most people think of terrestrial migratory species they’re likely to conjure up images of caribou covering vast expanses of Arctic tundra or endless throngs of wildebeest and zebras thundering across the Serengeti plains. But according to a study conducted by Stephen Blake, a researcher at Max Planck Institute in Germany, Galapagos giant tortoises on the island of Santa Cruz do, in fact, take part in a “classic migration, just played out on a smaller scale.”

According to a recent National Geographic article, Blake and his colleagues put GPS tags on 18 tortoises and conducted monthly population surveys to find that adult males over 20 years old, and some adult females, undertook a migration averaging about 3.7 miles (6 kilometers) over the course of two to three weeks. That's 650 to 1,000 feet (200 to 300 meters) each day. The article goes on to state that while not migrating, the tortoise generally only travel about 130 to 160 feet (40 to 50 meters) a day.

The study, which was published in the Journal of Animal Ecology, says that only adult males and some females take part in this slow-moving migration, which begins in the humid highlands of Santa Cruz Island, where the tortoises forage on grass and perennial plants. When the rainy season starts in December, they head to the lowlands, where they feast upon herbs and shrubs. When the rains stop (usually in June or July) and the vegetation starts to dry up, they once again head for the highlands, leaving behind most females and the juveniles, who may remain in the lowlands because they are less equipped to tolerate the colder highland temperatures.