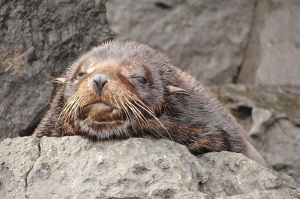 The results of a study of the world’s marine ecosystems published on Monday in the Proceedings of the National Academy of Sciences identify the Galapagos Islands as one of the 20 most important regions for the continued survival of the world's 129 marine mammal populations.

The study, led by Sandra Pompa of the National Autonomous University of Mexico, identifies 11 "irreplaceable" conservation zones, which contain species found nowhere else. Areas around the Galapagos Islands were included in this list of irreplaceable conservation zones. Other sites in this category include areas around Hawaii, Lake Baikal in Siberia, and the Amazon, Ganges and Yangtze Rivers.

The study also revealed nine main conservation areas, which contain 84% of the world’s marine mammals. These areas are the coasts of Argentina, Australia, Baja California, northeastern America, Peru, northwestern Africa, South Africa, New Zealand, and Japan. Their analysis also shows that most of these areas are already under pressure from human impacts such as pollution and shipping.

The study split the oceans into 10,000 square kilometer grids and examined the marine mammal species living in each. Each box was then assigned a value based on whether they contained important feeding grounds or if they were in migration routes. The map was correlated with information on human impacts such as climate disruption, ocean-based pollution and commercial shipping.  According to the researchers, 70% of the most impacted areas were near key conservation sites.

According to Pompa, marine ecosystems around the world are deteriorating rapidly because of habitat degradation, the introduction of exotic species and over-exploitation of natural resources. Several species of marine mammals became extinct in the 20th century, including the Caribbean monk seal, Atlantic gray whale and the Steller's sea cow, because of the trade in their fur, blubber and meat. The researchers believe that the Mexican vaquita, a small porpoise that is endemic to a small area in the most northern part of Baja California, will be the next species to become extinct. It is believed that only 250 individuals still exist in the wild.