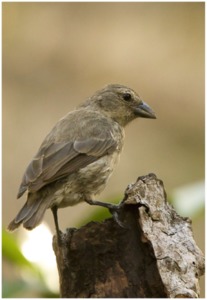 According to a recent Biological Conservation Journal paper, up to 900 tropical bird species could go extinct by 2100 because of warming temperatures around the globe. The critically endangered mangrove finch, which is endemic to the Galapagos Islands, is among the list of 900 at-risk species identified in the report. The finding is modeled on the effects of a 3.5C (6.3F) increase in the Earth's surface temperature.

Carl Sekercioglu, the author of the paper, says that species may struggle to adapt to habitat loss and extreme weather events. Mountain, coastal, restricted-range, and species unable to get to higher elevations could be the worst affected.

In the Galapagos, rising sea levels would threaten the habitat of the mangrove finch, which, as its name implies, lives in the mangroves on the island of Isabela, where it feeds upon insects, larvae, spiders and vegetable matter. It was once also found on the island of Fernandina, but recent surveys have failed to record the species there. BirdLife International classifies the species as critically endangered and it is currently estimated that only between 60 and 140 individuals are still left.

Many climate experts predict that global temperatures will rise by 3.5C (6.3F) by 2100, which would cause sea levels around the world to rise significantly.

You can read more about the study on BBC.com.

Image courtesy of the Public Library of Science.