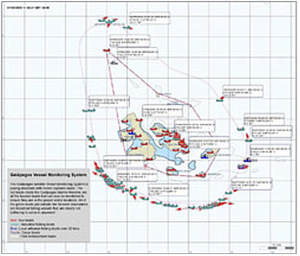 This is the first of two articles on issues facing the Galapagos Islands.  These appeared recently in our annual report to members.

In 2007 UNESCO moved the Galapagos Islands to its World Heritage in Danger List. It cited invasive species, human migration and settlement, uncontrolled tourism growth, and the failure of governmental institutions to deal with these threats.

Simply stated, all pressures are still there and are increasing, especially tourism and governance.

“If the current pattern of growth is not altered, we face the loss of the natural treasures that make Galapagos unique.”

Now we must add the increased risk of climate change, which, like an El Niño event, can have devastating effects on the islands.  See the  IGTOA report on this.

You can read more in depth with 2009 edition of  Critical Issues in Galapagos, published by Galapagos Conservancy, Charles Darwin Foundation, and the Galapagos National Park.

If you haven’t yet, view the IGTOA video,  Challenges Facing Galapagos and accompanying videos on best practices.

Over the past three years, there has also been progress. Just this past month, a UNESCO monitoring group visited the islands and reported progress in several areas, particularly the threat of introduced species of plants and animals.

There are new controls, such as screening luggage for organic materials and spraying aircraft for insects. There are also plans for a new facility on the mainland where cargo boats can be inspected before they leave for the islands.

The eradication of goats from  Islabela Island has been heralded as a major environmental achievement. And now there is a 5-year program for the restoration of  Floreana Island.

With the introduction of immigration control cards, Illegal immigration has slowed down, though not been halted.

There is a new recognition of the need for culture building among the resident population. Although the educational system is still inadequate, some modest steps have been taken. IGTOA, for instance, funded a pilot project for an environmental education program.

One of the most positive developments uses global positioning technology to monitor the Marine Reserve. After several years of work, the National Park Service, WildAid, the Ecuadorian navy and Conservation International launched a successful Vessel Monitoring System (VMS).

A small GPS unit is placed on all fishing, tourism, cargo and patrol boats over twenty tons. Boats regularly transmit their position, and a control center in the Park Service can view any boat’s location at any time.

This is a tremendous step forward. The Park can now detect illegal fishing by industrial fleets entering the Marine Reserve. It also benefits the local people by protecting fisheries and saving lives by giving the pinpoint position of boats in danger.

All smaller vessels are scheduled to join the system in the coming year. We’ll be describing an extension of this system in our discussion on project funding.

Coming soon, we’ll have an important discussion of the growth of tourism and IGTOA’s response.