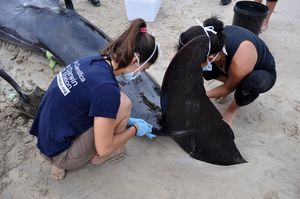 "We are thrilled to receive this grant from IGTOA and to know that we can continue to count on the support of their members and their guests. Visitors to Galapagos play a very important role in the protection of these wonderful islands and the surrounding seas, each one becoming an ambassador for conservation and sustainable tourism. We are excited to renew this important partnership for 2014."

Sound science is at the core of all successful conservation efforts in the Galapagos Islands, which is why IGTOA is proud to announce that it is donating $20,000 in general operating funds to the Charles Darwin Foundation this year.

Founded in 1959, the CDF operates under agreement with the Government of Ecuador and provides scientific knowledge and technical support to government institutions, including the Galapagos National Park, in order to help ensure the lasting conservation of the islands. The CDF operates the Charles Darwin Research Station (CDRS), the oldest, largest and most successful scientific research institution operating in the Galapagos Islands. It is one of the most popular visitors sites in Puerto Ayora on the island of Santa Cruz.

Over one hundred scientists, educators, research assistants, support staff, and volunteers from all over the world take part in this effort. Ninety percent of the organizational staff are Ecuadorian, and the CDF is committed to providing training to residents of the Galapagos to become future scientists.

In 2013, IGTOA provided the CDF with $14,989 to establish a long-term environmental surveillance and monitoring program to evaluate the health status of, and threats to, the natural inhabitants of the Galapagos Marine Reserve (GMR). The funds allowed the CDF to create an emergency network to detect sick, injured or dead marine wildlife in the reserve and allow conservation managers to obtain important information about injuries and cause of death and respond more quickly and effectively to disease outbreaks.

In 2012, the CDF received a total of $28,000 from IGTOA, including $10,000 for general operating support and $18,000 to help fund the interpretive services program at the CDRS, which enables young Ecuadorians and Galapagos residents to gain experience in tourism and public relations.

IGTOA has long supported the work of the CDF, and has donated hundreds of thousands of dollars to the organization since 1996.