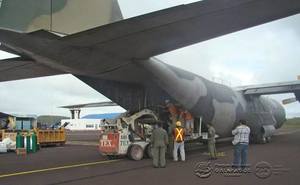 Yesterday, the Galapagos National Park released a statement regarding the stranded tanker off the coast of San Cristobal. The freighter became lodged on some rocks there on Friday, May 9th.

According to the statement, an Ecuadorian C130 aircraft landed in Puerto Baquerizo Moreno on Wednesday with equipment to assist in the raising and removal of the Galapaface I. The equipment included a generator with sufficient capacity to operate a crane that is being used to finish offloading cargo from the ship. All perishable cargo has now been removed.

According to the salvage company in charge of the operation, the tanks of lubricating oil, which were a primary concern, have also been offloaded.  In addition to the generator, the plane delivered steel plates to repair the cracked hull of the ship.

The plan, according to park statements, is to raise the freighter with buoys and tow it off the rocks into open water.

The park released a statement earlier this week stating that the affected area of the marine reserve is constantly being monitored by the Galapagos National Park to identify potential impacts. Water samples were taken at different points, including the hold of the ship, and they will be tested for pollutants. That statement went on to say that officers from the biosecurity agency and police were conducting partial censuses of sea lion colonies in the area and that no abnormalities had been reported.