The Galapagos Conservation Community Mourns the Passing of a Legend 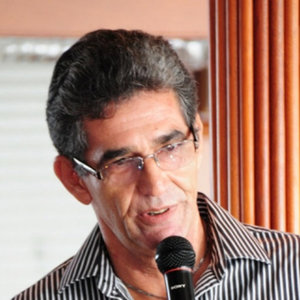 Felipe Cruz, who played an outsized role in Galapagos conservation over the last three decades, passed away yesterday in Chile. He was 60 years old.

He served as the Deputy Director of Charles Darwin Foundation (CDF) where he played a pivotal role in some of the most important conservation success stories in the history of the islands. Project Isabela, for example, which he helped spearhead, led to the removal of 250,000 feral goats on Isabela Island and is widely considered to be one of the world's most ambitious and successful invasive species eradication projects. It is credited with saving the island's once dwindling giant tortoise populations and for restoring much of its endemic biodiversity.

Dennis Geist, president of the CDF, called Felipe "one of the most important people in the history of the CDF," upon Cruz's retirement from the organization in 2014.

IGTOA board member Marc Patry, who worked with Felipe at the CDF for four years, described him as  "a hard working, visionary and dynamic leader with Galapagos conservation at the forefront of his concerns for most of his life."

Cruz was born on Floreana Island on April 22 1958, and was part of one of the first families of settlers from Ecuador to arrive in the archipelago. Many of his 12 siblings also went on to play important leadership roles in the Galapagos Islands. His sister Marilyn currently heads up the Galapagos Biosecurity Agency, which is responsible for keeping invasive species out of the islands. And his brother Eliecer served as the director of both the Galapagos National Park and WWF-Ecuador and as the Minister of the Galapagos Governing Council.

A press release issued by the CDF this morning on behalf of Cruz's family said, "his brilliant contribution to the conservation of our World Heritage Site will always be remembered and honored in our hearts and minds."

Everyone who has had the pleasure of visiting the Galapagos Islands or who will visit the islands in the future owes Felipe Cruz a debt of gratitude for his tireless work to preserve and protect the islands. On behalf of IGTOA and its member companies we extend our deepest sympathies to the Cruz family.

Fabian Cruz
over 2 years ago

I will always miss Felipe

Gerd Rübsam
over 2 years ago

Felipe was an inspiring man with great leadership skills and with such a friendly way to treat everyone who had the luck to be close to him. He was unique!