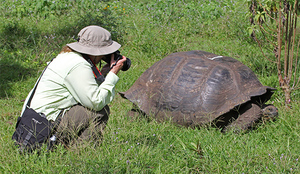 The Galápagos Islands continue to call to increasing numbers of visitors — from a few thousand annually in the 1960s to more than 170,000 today. The purpose of the Galápagos National Park authority’s new regulations that will go into effect on February 1, 2012, is to enhance those travelers’ experiences while protecting the fragile ecosystems of what were once known simply as the “enchanted islands.”

Several recent news stories regarding the new regulations have either caused confusion or spread misinformation. In reality, while most tour providers were limited to seven-night itineraries under the old regulations (with only a few authorized to conduct 10-night or 14-night trips), the new regulations require that cruises in the Galápagos operate on a 15-day/14-night schedule. Operators may divide that span of time into a maximum of four segments. It is believed that most tour operators will split their itineraries into: 1) two, seven-night trips; 2) two, five-night tours and one, four-night trip; 3) two, four-night tours and one, six-night trip; or 4) two, four-night and two, three-night trips. During that 15-day timeframe, a boat may not visit the same site twice, with the exception of the Charles Darwin Research Station on Santa Cruz Island.

Under the previous regulations, some sites — such as Darwin Bay on Tower (Genovesa) Island and Tagus Cove on Isabela Island — were off-limits to larger vessels. Lifting that ban will result in increased visitor numbers at underused spots and decreased numbers at sites that are becoming imperiled from too much traffic.

For the first half of 2011, the majority of travelers landed at the airport on Baltra Island. A smaller share of visitors landed at the San Crisóbal Island airport. By including the requirement in the new regulations that the airport on San Cristóbal be utilized at least once in every 15-day/14-night cruise schedule, some of the tourist pressure on Baltra will also be lightened.

“Based on feedback we’ve received from IGTOA members,” says Matt Kareus, executive director of the International Galapagos Tour Operators Association, “most seem to see the new rules as a step in the right direction. These regulations will help reduce the impact on certain important sites and should, overall, improve visitor experiences.”

The Galápagos Islands were among the first group of sites added to the World Heritage List in 1978. But in 2007, threats from increasing tourism, overfishing, and encroaching invasive species put the Galápagos on the List of World Heritage in Danger places. However, because of Ecuador’s progress in strengthening conservation measures, the Galápagos were removed from that roster in July 2010.

The new regulations should help ensure that the Galápagos do not become “endangered” again.

Feature image: The unique wildlife found in the Galapagos draws visitors from all over the world. ©John T. Andrews