A Chinese fishing fleet, so massive that it's visible from space, has crowded along the boundary of the Galapagos Marine Reserve and it's decimating marine life and polluting the beaches of the Galapagos archipelago with tens of thousands of discarded water bottles. The fleet, which was first spotted on July 16, stretches across 300 miles and is made up of 265 vessels, including longline fishing boats, industrial trawlers and warehouse ships.

While ostensibly there to fish for squid, conservationists warn that the fishing fleet's real targets are sharks, the fins of which are sold to make shark fin soup. Though technically illegal in most countries, ongoing demand for the soup (which can cost upwards of $400 per bowl) is responsible for the slaughter of 100 million sharks worldwide each year. A study released earlier this year by Florida International University concludes that the vast majority of shark fins sold in Hong Kong restaurants can be traced back to the eastern Pacific, an area that includes the Galapagos Marine Reserve. 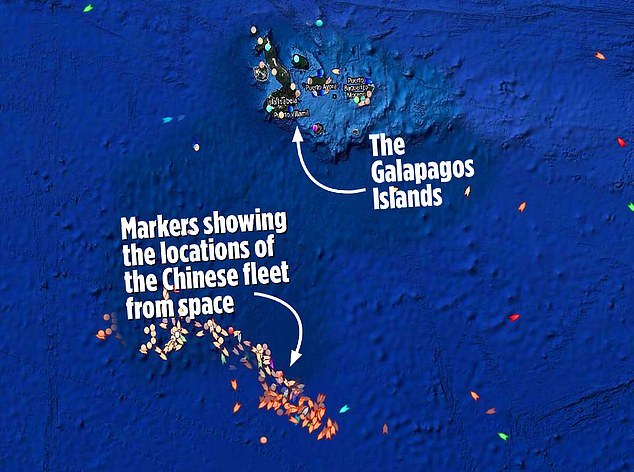 The fleet's industrial fishing trawlers, among them the 450ft-long Hai Feng 618, drag weighted nets along the seafloor, destroying habitat and indiscriminately killing any species happen to be in the way. The fleet also employs longline fishing, a practice in which thousands of baited hooks are attached to a single fishing line that can stretch for miles. Experts estimate that the armada's longline fishing operation may consist of 25 million hooks ore more. The practice is controversial and is condemned by many environmentalists because it involves significant bycatch of other species, including seabirds and turtles. To make matters worse, Galapagos locals are reporting that approximately 25,000 Chinese-labelled plastic water bottles, presumably throw overboard by the fishermen, are washing up on the islands' beaches every day.

Technically. the fleet is operating on the outskirts of the Galapagos Exclusive Economic Zone, where there are no laws regulating fishing. Still, many suspect that at night smaller vessels are illegally entering the Galapagos Marine Reserve and fishing for sharks. The potential impact of these activities on marine life is staggering. In 2017, a single Chinese fishing vessel was apprehended in Galapagos waters with a cargo of 300 tons of illicit shark fins.

Still, many in the Galapagos are rightfully demanding action, though so far Ecuador's government's response has been tepid at best and Beijing has denied any wrongdoing.  Many have pointed out the fact that China has invested billions of dollars in Ecuador's infrastructure in recent years and claim that the government is tacitly ceding the islands to the Chinese as a result.

Whatever the case, it's abundantly clear that action needs to be taken to better protect the marine life of the Galapagos Marine Reserve, which is vast and difficult and expensive to effectively patrol. The reserve has some of the strictest fishing regulations of any marine reserve in the world. A limited number of Galapagos fishermen are allowed to fish there, yet regulations are meaningless if they can't be enforced or if the government of Ecuador is not willing to take a stand.