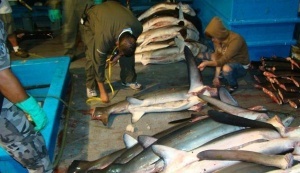 On July 18th, the B/P MARY I, and 6 fibras (small open fishing boats) found with it, were captured by the Galapagos National Park’s Sea Ranger 2, with the support of the Navy. The boats were located southeast of Genovesa Island, 20 miles within the boundaries of the Galapagos Marine Reserve at the time of their detention. The boats did not arrive in Puerto Baquerizo Moreno on San Cristóbal Island on the afternoon of July 19th because of poor sea conditions. At 5:30 pm, following the required legal proceedings of naval authorities, police, and local prosecutors, the holds of the Mary I were inspected.

As required by Ecuadorian law, all of the illegally-caught sharks were returned to the sea today. Three of the 30 arrested fisherman – the captain and two crew members – joined the scientists to witness the burial to ensure transparency in the disposal of their catch. Before returning them to the sea, scientists measured and sexed each shark and took samples for genetic and demographic analysis. They discovered during this process that there were a total of 379 sharks slaughtered, not 357 as originally reported. The dorsal fins had been almost completely severed, so it is believed that they were captured for the in-demand Asian delicacy of shark fin soup.

The arrested fishermen are currently in jail awaiting a hearing where they will face criminal charges. It is illegal to capture, sell and transfer sharks of any kind in the Galapagos Marine Reserve (GMR). In addition, the Special Law for Galapagos, which established the GMR, prohibits industrial fishing activities, including the use of longlines.